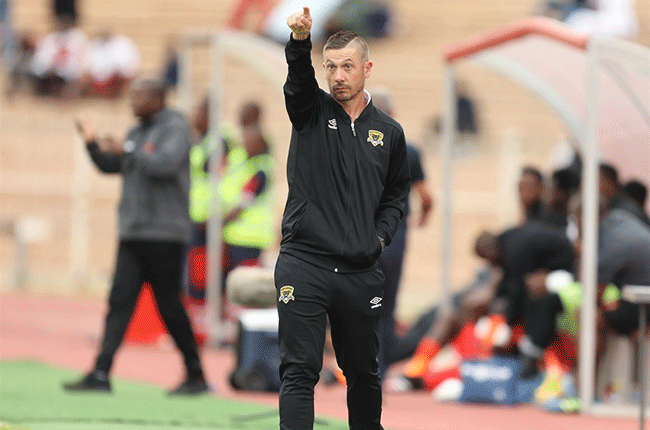 Former Black Leopards head coach Alan Clark has spoken frankly about the shortcomings of PSL coaches, claiming they have been stagnating.

Clark left Leopards ahead of the 2019/20 season's resumption and is now set to take charge at Kosovo Superleague outfit FC Llapi.

Reflecting on his coaching experiences in South Africa and what he's seen from other PSL coaches over the years, Clark pointed out that there is much room for improvement as he fears the level of coaching is worryingly stagnant.

"What I learnt from my experiences in South Africa is that many coaches are afraid, they don't want to question, there is a lack of critical thinking," Clark told the South African Football Journalists Association (SAFJA).

"I think in South Africa we must be careful that football outside in the world is changing so much.

"But inside there is not much change than coaches who change their badge on a shirt every year moving through the same clubs.

"We should be careful it will stagnate our football. But instead of stagnating, I want to develop, I want to be better."

Clark then turned his attention to the national team, warning that the lack of forward thinking on club level has hamstrung Bafana Bafana.

"The biggest stagnation in the performance of our football is our national teams. We can compete nicely with bigger teams, but there is very little growth or change within clubs," he added.

"We are not producing players that can compete at national team level. Nothing develops because the same players are playing the same way they used to, in my opinion, you see that in the [Bafana Bafana] national team and maybe Under-21 level."

We live in a world where facts and fiction get blurred
In times of uncertainty you need journalism you can trust. For 14 free days, you can have access to a world of in-depth analyses, investigative journalism, top opinions and a range of features. Journalism strengthens democracy. Invest in the future today. Thereafter you will be billed R75 per month. You can cancel anytime and if you cancel within 14 days you won't be billed.
Subscribe to News24
Related Links
UEFA discusses allowing fans back in stadiums
Bayern hope Champions League success can convince Alcantara, Alaba to stay
Eight Aberdeen players self-isolate after two positive coronavirus tests
Next on Sport24
Ncikazi shoulders responsibility after CAF final heartbreak: 'There is no other excuse!'