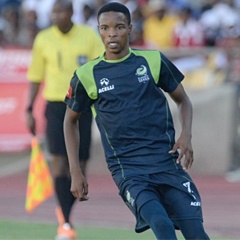 Cape Town - Golden Arrows have completed the signing of Platinum Stars winger Mahlatse Makudubela on a loan deal that will run until the end of the current campaign.

The skilful winger, who was once tipped for a bright future in the PSL, has struggled for game time under Cavin Johnson this season, leading the 25-year-old to seek a move to Abafana Bes'ethende.

Dikwena reportedly failed in negotiations to renew Makudubela's contract which lead in Clinton Larsen swooping in for the former United FC winger.

"Yes, it is loan deal from Platinum Stars until the end of the season," Makudubela's agent, Abbie Rasimphi, told KickOff.

"I can't talk about other clubs who were interested in him, but Arrows showed great interest in the player."

Makudubela is expected to compete with Andile Fikizolo, Kudakwashe Mahachi and Deon Hotto for a place in Larsen's starting XI.