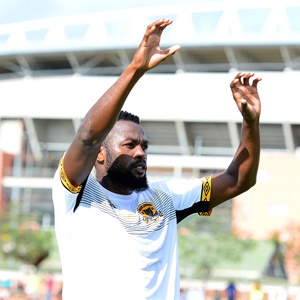 Despite finishing last season as the top scorer in the Absa Premiership, Black Leopards received no offers for Mwape Musonda in the recently concluded South African transfer window.

The Zambian international became the first player to crack the 15-goal mark in the South African top-flight since Siyabonga Nomvethe in 2012.

After scoring 16 goals in the previous campaign, the expectation was that multiple offers would be tabled for the 29-year-old, but according to the club's general manager Tshifhiwa Thidiela, nothing concrete was put on the table.

"I would read a lot of rubbish in the newspapers about big money offers, one even said R17 million, but we never received a single bid," he told the media.

"We would have been happy to sell him.

"He has done a lot for the cub and we did not want to stand in his way if an offer was made."

Musonda missed the first three games of the season but returned in the club's last outing against Maritzburg United.

He is expected to be in the starting line-up against Baroka FC at Thohoyandou on Sunday.

We live in a world where facts and fiction get blurred
In times of uncertainty you need journalism you can trust. For only R75 per month, you have access to a world of in-depth analyses, investigative journalism, top opinions and a range of features. Journalism strengthens democracy. Invest in the future today.
Subscribe to News24
Related Links
Brockie on move to Maritzburg: 'Motsepe played a big role'
Rantie looking to revive career after signing with Sundowns
CT City wanted Ngoma to replace Links
Next on Sport24
WATCH | Another referee error denies Bloem Celtic win over Sundowns