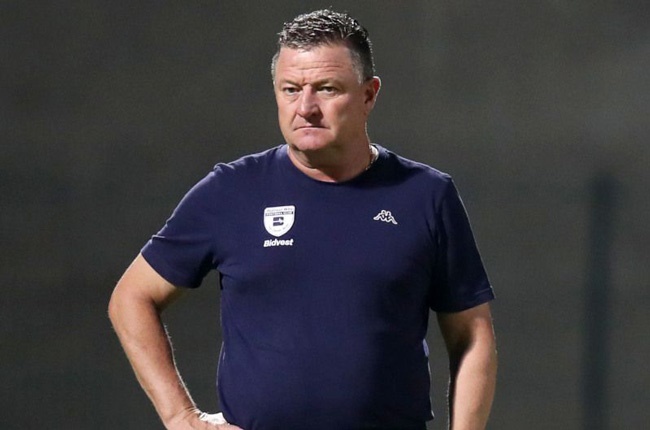 Gavin Hunt has been appointed as the new head coach of Soweto giants Kaizer Chiefs on a three-year deal, the club announced on Thursday.

The former Bidvest Wits head coach replaces the outgoing Ernst Middendorp who was sacked by the club last Wednesday after narrowly missing out on the league title.

"We looked at our situation and our needs before deciding on Gavin," chairperson Kaizer Motaung said in a statement.

"He brings with him an abundance of experience, having coached about fives teams in the Absa Premiership. There is success wherever he has coached.

"Given that the Covid-19 epidemic has forced us to finish the season in the bio-bubble and that the squad will only rest for two weeks before the players return for pre-season, we needed a coach who understands the local market and conditions.

"We believe that with Hunt we have brought in a person with the right experience and energy to do just that," Motaung added.

The Soweto giants also confirmed that competing on the continent was a priority after qualifying for the upcoming CAF Champions League.

"Playing on the continent is key for us as we haven’t done as well as we should have," Motaung added.

"We have players who have participated in the competition and this experience should certainly be to our advantage."

"The other thing I have always emphasised is the need for coaches to equip themselves with the requisite knowledge. The game has changed and become much more scientific", Motaung said.

"We know Gavin always endeavours to learn more about the game by attending courses both locally and overseas. This knowledge will come in handy to guide our team. We are looking forward to him sharing his experience with the team."

Hunt is the Premier Soccer League's longest-serving head coach and continues his remarkable run of having coached consecutively every year since his first coaching stint at Seven Stars in 1995.

To go alongside being the longest-serving coach, the 56-year-old is also one of the most successful coaches in the modern era having lifted four league titles.

Three of those titles came during a remarkable period of success for Hunt by clinching consecutive Absa Premiership titles with SuperSport United from 2007/08 to 2009/10.

Which led to Hunt being named as the PSL's Coach of the Year three years in a row as he solidified his reputation's as one of South Africa's best-ever tacticians.

Perhaps an even greater achievement is Hunt leading Bidvest Wits to their first and only ever league title in the club's 99-year history during the 2016/2017 campaign.

Hunt will now meet his new team for the first time next week when the squad returns to prepare for the upcoming 2020/2021 season.

We live in a world where facts and fiction get blurred
In times of uncertainty you need journalism you can trust. For only R75 per month, you have access to a world of in-depth analyses, investigative journalism, top opinions and a range of features. Journalism strengthens democracy. Invest in the future today.
Subscribe to News24
Related Links
Cape Town City duo scoop monthly PSL awards for August/September
TS Galaxy officially announce purchase of Absa Premiership status
Lionel Messi scores twice as Barcelona win friendly
Next on Sport24
Josta Dladla: 'Kaizer Chiefs can surprise a lot of people'