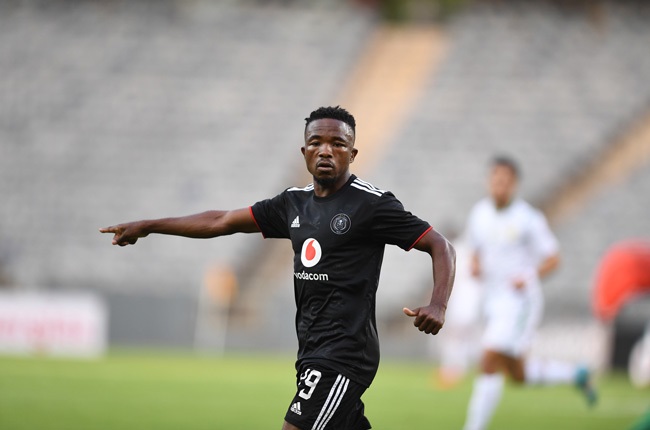 Orlando Pirates defender Paseka Mako was rushed to hospital after colliding with goalkeeper Richard Ofori during their DStv Premiership match against Baroka FC on Tuesday at the Peter Mokaba Stadium.

The encounter was already in stoppage time when Ofori attempted to clear the ball with his team-mate Mako approaching in the same direction when they collided.

It has since been confirmed by Pirates that Mako suffered a head injury.

90+4’ Concern for Pirates as Mako remains down after a collision with Ofori.

He immediately dropped to the floor following the collison and referee Masixole Bambiso, who was close by, immediately blew his whistle, waving his arm for the medics to get onto the field.

Ofori then checked on his team-mate before yelling for medical attention as well. Pirates captain Happy Jele, who was close by also urged the paramedics to get onto the field as quickly as they could.

It did, however, take the paramedics vehicle longer than expected to arrive on the field, after some confusion, as Pirates and Baroka players formed a circle around Mako while he was receiving medical attention.

After the paramedic vehicle arrived, Mako was rushed to hospital, although which medical facility that is remains unknown at this point.

The match continued for about one minute afterwards before the referee Bambiso blew his whistle with both set of players and club staff looking dejected and concerned by what had occurred.

The 0-0 scoreline sees the Buccaneers (39 points) move into fourth place, while Baroka remain anchored in 16th position on 18 points.

Pirates return to action on Sunday against Tanzania giants Simba in the quarter-final first-leg of the CAF Confederation Cup.