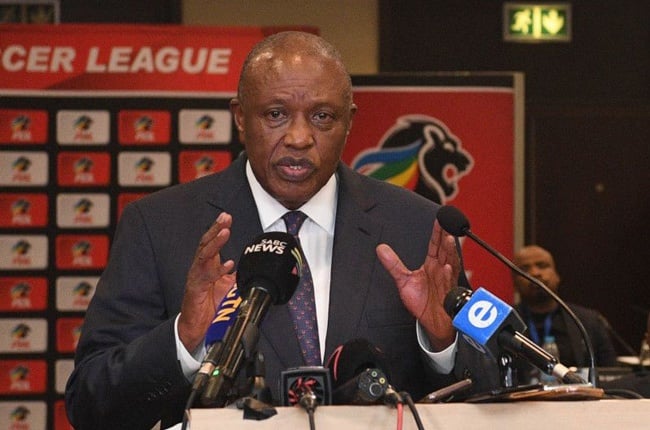 The Premier Soccer League (PSL) on Thursday announced broadcaster DStv as its new headline sponsor with the league now renamed as the DStv Premiership.

DStv is a sub-Saharan African video entertainment company owned by the MultiChoice Group.

"The Premier Soccer League is proud to announce that MultiChoice's DStv brand, has signed a five-year deal to become the new title sponsor of the premier division," a statement said.

"This is a continuation of a vibrant and fruitful partnership between the PSL and the MultiChoice.

Despite the financial impact of the Covid-19 pandemic, the league headed by chairperson Irvin Khoza shared its elation at securing the league's financial future for the next five years.

"As the PSL continues to innovate with a quest to improve its product, it will have a full backing of DStv, whose offering requires an abundance of local content. There is no "them and us," said Khoza.

"We are joined at the hip to produce enhanced consumption of the best product for our deserving supporters."

"It creates equal conversations between people irrespective of their educational backgrounds and social status.

MultiChoice Group CEO, Calvo Mawela said: "Through the DStv Premiership, we are expanding football's reach deeper and wider in partnership with the PSL.

"This league is for every South African and every community represented in our uniquely diverse nation.

"With more games televised than ever before, we are deliberately creating space for all South Africans to call this competition their own."

Johannesburg-based DStv had been strongly linked by the media as a candidate for the headline sponsorship.

SuperSport, which has 15 channels in the DStv package, is the main broadcaster of the PSL, having signed a third, five-year deal last year for an undisclosed amount.

The pay-channel reportedly paid R1.6 billion in 2007 for the initial deal and R2 billion for the first renewal.

Absa sponsorship boss Mtunzi Jonas said at the time that the decision of one of five major banks in South Africa to withdraw was not related to the ongoing coronavirus pandemic.

"Absa senior leaders have taken a decision which they feel is best for the company," he said of a bank that sponsors the country's rugby team, which won the 2019 World Cup in Japan.

According to reports, Absa were investing R140 million a season in the most recent three-year sponsorship deal that came to an end at the end of the 2019/2020 campaign.

Additionally in November 2019 for the first time in its history declared a record R1 billion in revenue for the 2018/2019 financial year.

The league, which was previously sponsored by Castle Lager - then known as the Castle Premiership - from its inception in 1996 until 2007, will now be fronted by DStv as the new title sponsor moving forward.

We live in a world where facts and fiction get blurred
In times of uncertainty you need journalism you can trust. For 14 free days, you can have access to a world of in-depth analyses, investigative journalism, top opinions and a range of features. Journalism strengthens democracy. Invest in the future today. Thereafter you will be billed R75 per month. You can cancel anytime and if you cancel within 14 days you won't be billed.
Subscribe to News24
Related Links
Deon Hotto: It is a great honour to join Pirates
All the facilities, players and talent: But do Wits University have the will to mount PSL comeback?
Black Leopards retain PSL status with decisive win over Ajax CT
Next on Sport24
Sundowns show class in crushing win over Kaizer Chiefs