Chiefs should be wary of Acornbush 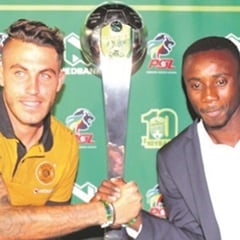 Johannesburg - The big guns must be happy after they avoided one another in the Nedbank Cup last 16 draw in Randburg on Thursday night.

But Kaizer Chiefs have to be worried after they were drawn against ABC Motsepe League side Acornbush United, the team that shocked Premier Soccer League (PSL) title contenders Cape Town City 1-0 on Sunday at Kabokweni Stadium, Mpumalanga.

The big question all football lovers must be asking is: Who are Acornbush?

The Mpumalanga-based club were established 30 years ago by the late Rexon Mashile and his son Maphuta, who is the chairperson of the club and who was in attendance at the draw.

They are based in Kabokweni, 30km north of Mbombela, and are coached by former Jomo Cosmos assistant coach MacDonald Makhubedu.

Their chief executive, Michael Sias, was quoted on Kick Off website as saying: “I haven’t slept since the draw. People have been calling me the whole night, asking which stadium we were going to use for this fixture.”

He told City Press that they would like to play the match at their 5 000-seater home venue, Kabokweni Stadium.

Sias said he would warn his players not to give Amakhosi players too much respect, as he believes some of his players can match their opponents “pound for pound”.

He said Chiefs should be scared.

“We are going to be in the final in this competition. We have already been crowned the Motsepe League champions and now our full focus is the Nedbank Cup,” he said.

Chiefs will hope there will not be a repeat of one of their biggest upsets, when, in 2011, Amakhosi lost 2-1 against then Vodacom League side Baroka FC.

It has not been announced which stadium will host the two teams – Kabokweni Stadium may not be able to host the thousands of supporters Amakhosi usually attract wherever they go.

The Ke Yona matches will be played between April 5 and 9. The PSL is still to announce the exact date.

We live in a world where facts and fiction get blurred
In times of uncertainty you need journalism you can trust. For only R75 per month, you have access to a world of in-depth analyses, investigative journalism, top opinions and a range of features. Journalism strengthens democracy. Invest in the future today.
Subscribe to News24
Next on Sport24
DStv Premiership: Covid dampens cricket, rugby's festive hopes with PSL ready to rock 'n roll