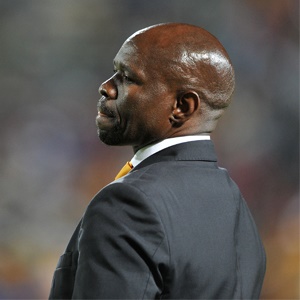 Johannesburg - Kaizer Chiefs dropped more points in the race for the ABSA Premiership title after being held to a goalless draw by a resolute AmaZulu at the FNB Stadium on Saturday evening.

Steve Komphela's side came closest to breaking the deadlock in Jo'burg, but Teenage Hadebe saw his header pushed onto the woodwork by Energy Murambadoro in the first half.

Itumeleng Khune was the busier of the two keepers in the second half, although he wasn't seriously tested as the spoils were shared in the end.

After an evenly-contested opening to the match, Khune was called into action for the first time on 10 minutes when he held onto Siyethemba Mnguni's long-range effort.

Chiefs' first clear-cut opportunity arrived five minutes later from a free-kick on the right that Leonardo Castro headed wide of the left post.

Mhlengi Cele was presented with a decent chance for Usuthu in the 28th minute after being picked out with a cutback pass on the right, but he fired well over the target from inside the box.

The visitors had Murambadoro to thank for keeping them in the contest five minutes later as he reacted quickly to parry Hadebe's header onto the left post from a free-kick on the left.

Mnguni threatened at the other end with a well-struck volley from 30 yards out that swerved narrowly wide of the left post six minutes before half-time, with Khune at full stretch.

Sadat Ouro-Akoriko tried his luck with an ambitious effort from a long way out in stoppage time when space opened up for him, but the ball drifted well wide of the right post.

Siphiwe Tshabalala drew a routine save out of Murambadoro with a free-kick from 30 yards out 11 minutes into the second half, while Ovidy Karuru failed to test Khune moments later as he fired wide of the near post from a low cross on the left.

Khune was forced to parry away Mnguni's strike from 20 yards out on the left just before the hour mark, and substitute Ryan Moon glanced a header wide of the near post from a corner on the left for Chiefs on 65 minutes.

Ramahlwe Mphahlele had a late chance to snatch victory for the hosts at the death, but he too failed to hit the target with a header that flew wide of the right post from a stoppage-time corner.

We live in a world where facts and fiction get blurred
In times of uncertainty you need journalism you can trust. For only R75 per month, you have access to a world of in-depth analyses, investigative journalism, top opinions and a range of features. Journalism strengthens democracy. Invest in the future today.
Subscribe to News24
Related Links
WRAP: Absa Premiership
Tosun brace sees Everton sink Stoke
West Brom in more trouble after Bournemouth loss
Next on Sport24
'It is going to be a big one!' - Ronwen Williams relishing Kaizer Chiefs battle