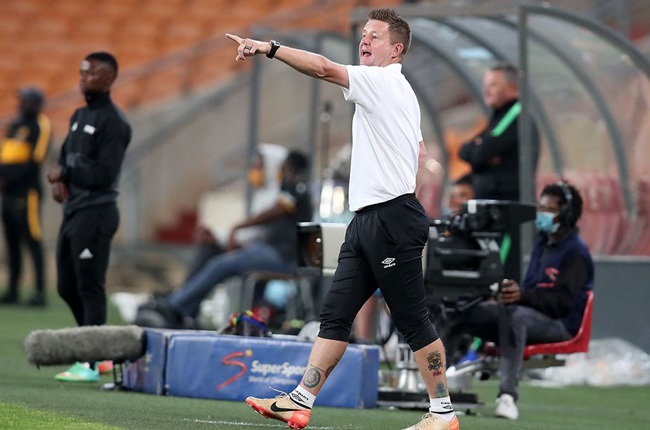 Black Leopards coach Dylan Kerr was disappointed to see his side throw away a two-goal lead to draw 2-2 with Kaizer Chiefs in their Dstv Premiership clash on Wednesday.

Leopards stormed ahead early on with a brace from Ovidy Karuru (12', 22'). Chiefs responded in the second half though with goals from Nkosingiphile Ngcobo (69') and Khama Billiat (86').

The result left the club in 15th place on the Dstv Premiership standings, with one win from six games.

Speaking after the tie, Kerr, who has only just joined the team following his departure from Baroka, admitted they threw the game away with too many mistakes.

He told SuperSport TV: "At half-time, we've got a big football board in the dressing room and I've drawn a diagram where we going to lose this game.

"You can't just flick a ball blind expecting someone to be there and in the second half we didn't keep the ball as well as I knew we can do.

"I'm pleased with the effort the boys put in. But it's a lesson to be learned. We're building. We should have taken three points, but we'll take a point away from home, so I've got to be happy but not really."

We live in a world where facts and fiction get blurred
In times of uncertainty you need journalism you can trust. For only R75 per month, you have access to a world of in-depth analyses, investigative journalism, top opinions and a range of features. Journalism strengthens democracy. Invest in the future today.
Subscribe to News24
Related Links
PSL changes date for January transfer window
Shalulile reveals he is developing a 'telepathic understanding' with Zwane and Erasmus
Blom: Chiefs players working hard to stay in Hunt's team
Next on Sport24
Mngqithi: 'There were many naysayers about Motupa coming to Sundowns'