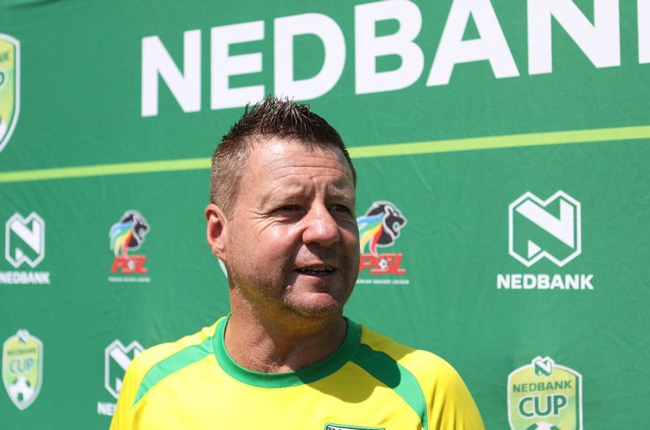 Dylan Kerr says he will be taking legal action against Baroka FC after being dismissed by the club despite still having three years left on his contract.

Having saved the club from relegation on the final day of the 2019/2020 season, Kerr was placed on suspension for undermining the chairman and owner in a televised post-match press-conference on SuperSport.

And on Friday, Bakgaga finally terminated the contract of the English tactician, with his future having been on tenterhooks for some time. But Kerr is not backing down without a fight as he maintains he 'did nothing wrong' and must still sit down with his sports lawyer, who is also a FIFA lawyer, to discuss the next steps.

"Let me speak to my lawyer first. It's not my decision, it's the club's, they just told me I'm dismissed, that's it," Kerr told KickOff.

"They did say why but I can't tell you because I still need to seek legal advice because I've got three years left on my contract. So I need to find out where that stands.

"Look, at the end of the day you know I've done nothing wrong and I've done my job. So they decided to terminate my contract, but I've got three years left. But there's nothing FDFFD until I get advice from my lawyer. Obviously he is a sports lawyer and he's a FIFA lawyer so we'll see what we've got when I speak to him.

"Look, there's a lot I can tell you but I can't tell you just yet. This weekend I'm not even opening that letter they gave me. I'm not even looking at it. I'm just going to leave it today, tomorrow, on Monday and probably move to Joburg on Wednesday, and then fly to Durban at the weekend.

"I'm sitting in the garden reflecting on my time at Baroka, which was successful because I saved them from relegation. I'm not going to read it today, it's Friday. I'm not going to let it spoil my weekend, I will read it on Monday. But my lawyer has it so that's okay.

"[Laughs] What I'm doing now is I'm sitting in my garden, soaking up the sunshine. If my mother was alive I would be phoning my mother, and my mother would tell me what to do. I've actually done nothing wrong.

"The charges against me were ridiculous. I can sleep at night knowing that I've done nothing wrong. It's never nice to be fired, that's the first time I've been fired.

"They've got a coach [Leopards], they've just hired a coach. I can't say anything, that's disrespectful to the coach. Yeah I left [my first stint] because my mom was dying."

Meanwhile, Thoka Matsimela has been ushered in as the new head coach, having overseen Bakgaga's first three games of the season in which they have picked up two wins and a draw.

We live in a world where facts and fiction get blurred
In times of uncertainty you need journalism you can trust. For only R75 per month, you have access to a world of in-depth analyses, investigative journalism, top opinions and a range of features. Journalism strengthens democracy. Invest in the future today.
Subscribe to News24
Related Links
Brazil struggle to beat Venezuela without Neymar
Senegal football chief joins Patrice Motsepe for CAF presidency bid
Tau, Zungu goals see off spirited Sao Tome in Bafana Bafana AFCON qualifier victory
Next on Sport24
Mngqithi explains why star-studded Sundowns signed 34-year-old Ralani