Efstathiou: We haven't had a chance to look at Rooi 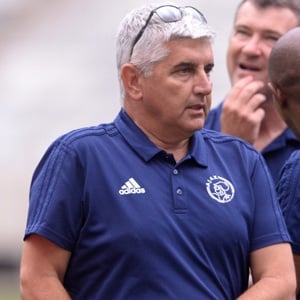 The 38-year-old former Orlando Pirates and Free State Stars defender joined Ajax Cape Town in February on a short-term deal until the end of the season.

He had been without a club since leaving Ea Lla Koto in 2019 and was yet to feature for Ajax before all sporting activities were suspended as a result of the coronavirus.

In an interview with the Sowetan on Tuesday, Mahamutsa said he is keen to remain with the Urban Warriors.

On Wednesday, Efstathiou revealed: "With Rooi, we haven't really had a chance [to look at him closely] - he hasn't played [a competitive match] yet, and this lockdown has messed that up as well.

"I mean Rooi is a fantastic professional and a great guy to have in the club, but I think his age is against him. So it's something that's ongoing and a discussion needs to take place.

"I think if he doesn't play, it's a problem for us, so he needs to get on that field so we can see what he can do."

We live in a world where facts and fiction get blurred
In times of uncertainty you need journalism you can trust. For only R75 per month, you have access to a world of in-depth analyses, investigative journalism, top opinions and a range of features. Journalism strengthens democracy. Invest in the future today.
Subscribe to News24
Related Links
Daniels: SuperSport are losing a great player
Mepham concerned about potential Premier League outbreak
Watford and Burnley staff tests positive for coronavirus
Next on Sport24
Kaizer Chiefs coach hits back at critics: 'I came into the club with no pre-season'