The 27-year-old Jampies, who was called up to the Bafana Bafana squad last year while playing for Jomo Cosmos, and who last played at Bloemfontein Celtic, has reportedly been on trial at Ea Lla Koto.

The defender also played in friendly games for the club against Bidvest Wits and Platinum Stars over the weekend.

The Cape Town-born has operated primarily as a left-back, but can also play in the middle of defence.

And it's in this area that Eymael sees Jampies as potentially adding value to the Stars squad.

"He is not yet fit, and a bit slow at fullback, but at centre-back, okay," Eymael told KickOff website.

"I have to talk with the bosses," he continued, "I expected better as a left-back but I can understand that he had a lack of explosiveness and also recovery because he didn't play since a long time.

"But I was surprised when I placed him at centre-back, where he was using his experience and his skills in duels, anticipation and aerial."

We live in a world where facts and fiction get blurred
In times of uncertainty you need journalism you can trust. For only R75 per month, you have access to a world of in-depth analyses, investigative journalism, top opinions and a range of features. Journalism strengthens democracy. Invest in the future today.
Subscribe to News24
Related Links
Benni: I want my players to enjoy their football
Mathoho apologises for red cards
Nhlapo: Igesund saved my career
Next on Sport24
LIVE | Mamelodi Sundowns v TTM 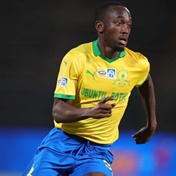