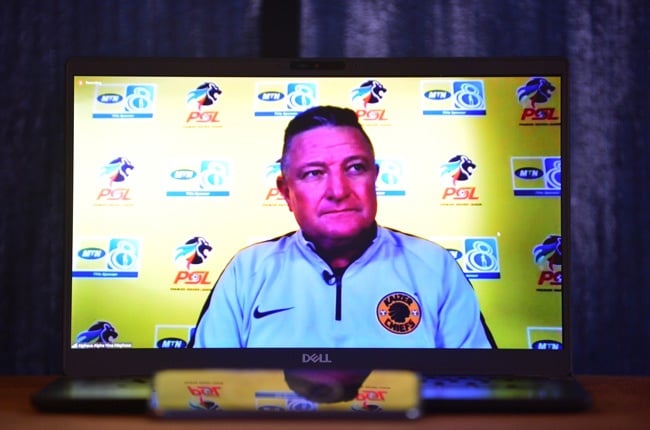 Speaking ahead of their opening Premiership clash this weekend Kaizer Chiefs head coach Gavin Hunt says that it is too early to judge the new-look Mamelodi Sundowns technical team.

The two sides will renew their rivalry on the opening day of the 2020/2021 league campaign on Saturday at the FNB Stadium after a dramatic title race last season.

Sundowns managed to grab their third consecutive league title when they narrowly beat Kaizer Chiefs to the Premiership trophy in an intense title battle on the final day of the season.

Since then both clubs have changed head coaches ahead of this season with Gavin Hunt appointed by Chiefs with the coaching trio of Manqoba Mngqithi, Rhulani Mokwena and Steve Komphela.

The 56-year old Hunt got his tenure off to a winning start in last weekend's MTN8 quarter-finals with Sundowns being knocked out at the first hurdle.

Despite their early exit, Hunt says that it is way too early to judge Sundowns' recent coaching appointments on that one performance.

"I don't really like commenting on this sort of thing regarding other clubs but I think it's way too early to judge, especially after just one game," Hunt said.

"In my opinion, they may even have strengthened their technical department as they've got all bases covered really.

"They've brought in good experience and have continuity with certain coaches who have already been at the club for a while.

Hunt added that he was expecting a tough encounter this weekend and that he expected the new-look Sundowns to continue threatening for titles.

"You can't just judge after one game, especially as I thought they should have won that game [1-0 defeat to Bloemfontein Celtic] quite easily.

"So I'm expecting them to be dangerous and pose the same threat this season and to likely be even stronger."

We live in a world where facts and fiction get blurred
In times of uncertainty you need journalism you can trust. For only R75 per month, you have access to a world of in-depth analyses, investigative journalism, top opinions and a range of features. Journalism strengthens democracy. Invest in the future today.
Subscribe to News24
Related Links
Zwane determined to win the PSL Footballer of the Season award
Zidane calls for calm after Real Madrid stunned by Shakhtar Donetsk
WRAP | Champions League
Next on Sport24
Percy Tau's goalscoring heroics for Al Ahly earns him second Player of the Week award