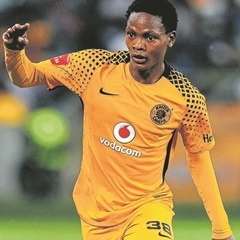 NO ISSUE: Wiseman Meyiwa is at the centre of malicious age-related rumours. (BackpagePix)

Johannesburg - Kaizer Chiefs football manager Bobby Motaung has weighed in on the allegations that one of the club’s young sensations is an age cheat.

Since bursting onto the scene and scoring on his debut for Amakhosi, 17-year-old Wiseman Meyiwa has been the subject of nasty comments on social media.

But Motaung, who said he was aware of the comments, said there was no substance to the allegations that Meyiwa was not 17, and they were not worthy of a response.

He referred to them as “lousy jealousy from haters.

“Why now?” asked Motaung. “This boy was there in the national Under-17 and Under-20 teams, and they didn’t say anything. These are people who want to pull him down and make him lose focus, and we are not going to dignify that with a comment. They must just leave our boy alone.

“Where were these people when he represented the country at World Cup events where they have age verification processes? Is it because he is now with the first team and they want to destabilise him? This is a pull-him-down syndrome because they want to see him fail, but he has our support.

“Whoever started this rumour must go jump because we are not going to entertain it".

Motaung said the club had gone through its own verification process and was happy with the result.

We live in a world where facts and fiction get blurred
In times of uncertainty you need journalism you can trust. For only R75 per month, you have access to a world of in-depth analyses, investigative journalism, top opinions and a range of features. Journalism strengthens democracy. Invest in the future today.
Subscribe to News24
Related Links
Amajimbos coach defends Chiefs 'youngster' amid age-cheating claims
Chiefs youngster looks up to Katsande
Next generation excites Komphela
Next on Sport24
OBITUARY | Abdul Bhamjee: 'Mr Soccer' left the game too soon