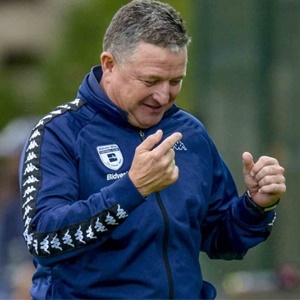 Hunt guided Matsatsantsa to three Absa Premiership titles in a row after taking over from Pitso Mosimane in 2007 before adding a fourth league title with the Clever Boys last season.

A club insider revealed that Hunt has been linked to the vacant SuperSport United post but it is unlikely that Wits would allow the decorated 52-year-old coach to leave for a rival club despite a disappointing 2017/18 season.

Despite a dismal start to their season with the club at one point bottom of the league standings the Wits hierarchy resisted the urge to get rid of Hunt as they felt there was no one better equipped to replace Hunt.

Meanwhile winger Thuso Phala has backed interim coach Kaitano Tembo to take over the role as head coach on a full-time basis at the end of the season.

Tinkler resigned from his job on March 2 after a dismal run of results. Assistant coach Tembo took temporary charge and has since overseen a 0-0 league draw with Maritzburg United and a 2-1 aggregate win over Petro Atletico in the first round of the CAF Confederations Cup.

Tembo previously took charge of the team during some of last year's Confederation Cup games when Tinkler's predecessor, Stuart Baxter, was confirmed as the new South Africa head coach.

According to Phala, he has drawn inspiration from Baxter's methods, making him the ideal candidate for the SSU hot-seat.

"Under the guidance of coach Stuart, I think he learnt a lot. He's the head coach for now and you can see how he is trying to do things back to how we were doing them under coach Stuart, and we are used to that philosophy," Phala was quoted as saying by KickOff.

"Going forward, I think he is a very good candidate. I am just hoping that they give him a chance because he deserves it. He has been in the assistant coach role for long and I think just throw him in there and see how it goes.

"He did well when coach Stuart was leaving. He took us all the way to the [Confederation Cup] final actually. He deserves a chance to grow personally as a coach and I think he would do well."

Phala's nostalgia for the Baxter era suggests a certain degree of player discontent under Tinkler, who admitted when he left the club that he had not been able to get a "unified and committed response" from his squad.

We live in a world where facts and fiction get blurred
In times of uncertainty you need journalism you can trust. For only R75 per month, you have access to a world of in-depth analyses, investigative journalism, top opinions and a range of features. Journalism strengthens democracy. Invest in the future today.
Subscribe to News24
Related Links
We are tired of draws - Komphela
WRAP: FA Cup quarter-finals
Outbursts only increase pressure on defiant Mourinho
Next on Sport24
Kaizer Chiefs have 'no knowledge' of plans to sack Gavin Hunt and re-sign Stuart Baxter