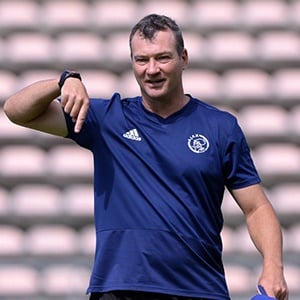 All sporting activities have been suspended for over a month in South Africa with no clear indication as to when the PSL may resume.

A number of leagues across the world are in discussions to determine the outcomes of their leagues, with France and the Netherlands already calling an end to their respective campaigns.

While Paris-Saint Germain were crowned Ligue 1 champions, no league winners were announced in the Eredivisie.

Marlin, who's Ajax team are currently on top of the GladAfrica Championship, told Far Post: "It wouldn't be logical to throw a whole season away.

"My hope is that they possibly push the Absa Premiership up to 18 teams for next season and come up with a solution for the least amount of games or no games to be played.

"The truth of the matter is that there's no right or wrong way to conclude the current season and each association needs to come to the conclusion which works best for their league and most importantly keeps the players and club staff safe."

We live in a world where facts and fiction get blurred
In times of uncertainty you need journalism you can trust. For only R75 per month, you have access to a world of in-depth analyses, investigative journalism, top opinions and a range of features. Journalism strengthens democracy. Invest in the future today.
Subscribe to News24
Related Links
HAVE A READ | Today's top 10 Sport24 articles
Liverpool mayor fears 'farcical' scenes if Premier League resumes
Grobler: It's nice to be linked with big teams
Next on Sport24
Sundowns thrash Stellenbosch as Ngcongca remembered