A desperate Kaizer Chiefs side had to come from a goal down to secure an all-important 1-1 draw against Stellenbosch FC on Sunday in an Absa Premiership encounter.

AS IT HAPPENED: Kaizer Chiefs 1-1 Stellenbosch

Man-of-the-Match Leletu Skelem scored the opening goal of an enthralling encounter on 35 minutes, for his second in successive games, but Lazarous Kambole netted a 69th minute equaliser.

The result left Amakhosi six points clear of second-placed Mamelodi Sundowns on 53 points but having played a game more.

Stellies ended the night in ninth place, with 34 points from 27 games.

It was a cagey start by both sides with no clear-cut chances at either end in the opening 10 minutes.

Chiefs finally carved out an opening after a slick passage of play but Reeve Frosler was only able to fire his shot, from the edge of the area, straight at Stellenbosch goalkeeper Lee Langeveldt.

There was no menace to a shot from Siphelele Ntshangase on the 18th minute before a free kick from the left from Marc van Heerden was confidently plucked out of the air from Chiefs' number one stopper Daniel Akpeyi.

Chiefs began to dominate possession, while a challenge on Lee Langeveldt from Leonardo Castro left coach Steve Barker looking on nervously as the keeper received treatment.

But it was Castro who had to be replaced, by Samir Nurkovic, after injuring his hamstring - but only after Siyabonga Ngezana headed just wide of the Stellenbosch post from a well-hit Bernard Parker delivery for the best chance of the match.

Parker was well off target with a speculative shot from range midway through the first period but Skelem made no mistake with a superb header from inside the box just moments later, after some superb trickery from Ashley Du Preez on the left to create space for his cross.

A glancing header from Ngezana fell kindly into Langeveldt's arms on 42 minutes as Chiefs looked get back in the game, with Nurkovic no closer to the target with his looping header on 44 minutes.

There was a blow for Stellenbosch before the break with Nathan Sinkala picking up an injury and needing to be replaced by Kristopher Bergman.

Ernst Middendorp made three changers at half time with Lazarous Kambole, Kgotso Moleko and Dumisani Zuma brought on for Ntshangase, Kharma Billiat and Siphosakhe Ntiya-Ntiya.

Both sides were looking to get forward with pace ith Kambole in with a chance after a loose touch from Nyiko Mobbie in the box, but Alan Robertson was on hand to clear

A 69th minute Parker free kick was over hit but Kambole was a welcome recipient from the next passage of play as the ball was floated back into the box by Frosler, leaving the striker to bundle the ball home.

Skelem turned Cardoso well inside the Chiefs' box but couldn't beat Akpayi with his shot soon after as Stellies made a triple change of their own with 10 minutes of the game remaining.

Parker kept shooting but without any effect, as Du Preez came agonisingly close to a winner for Stellenbosch when connecting to an excellent cross from wide from Mobbie but hit his shot into the side-netting.

Zuma fired a very late effort at Langeveldt as Chiefs kept probing for a winner, but it only ended with frustration for Chiefs, with Nurkovic picking up his sixth booking of the season, meaning he will miss Thursday's clash with Mamelodi Sundowns.

We live in a world where facts and fiction get blurred
In times of uncertainty you need journalism you can trust. For only R75 per month, you have access to a world of in-depth analyses, investigative journalism, top opinions and a range of features. Journalism strengthens democracy. Invest in the future today.
Subscribe to News24
Related Links
Namibian Shalulile 'best forward in South African PSL' - Da Gama
SA sports journalist S'busiso Mseleku to be laid to rest on Sunday
Quality lacking as Polokwane, Highlands Park battle to draw
Next on Sport24
Swallows soar to top of PSL standings with win over hapless Kaizer Chiefs 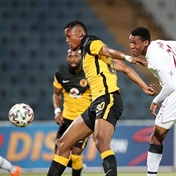