Masuku's future still in the air 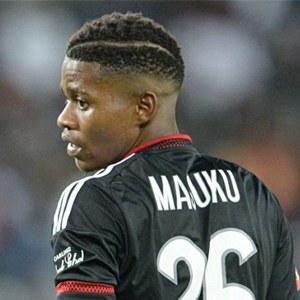 Johannesburg - Outgoing Orlando Pirates striker Menzi Masuku is still in the gloom as far as his future with the Buccaneers is concerned, despite both the Soweto giants and Chippa United confirming that the 23-year-old forward is heading to Port Elizabeth.

However, Pirates football administrator Floyd Mbele confirmed that they had an agreement with the Chilli Boys over Masuku’s move and as things stand, the promising young star will be in the colours of Chippa United next season.

Mbele said Masuku was in camp with the national Under-23 team while discussions between the two clubs and his agent took place.

The Kwazulu Natal born goal poacher is not part of the Buccaneers team for the upcoming 2016/17 campaign.

“The club had a conversation with Chippa United, who showed interest to have him the last time we spoke,” Mbele said.

“We concluded an agreement for him to be able to go to Chippa United and obviously he was in camp for the Olympic Games.

“We spoke to his agent, we expressed the conversation and now as far as we are aware, he is going to Chippa United until we are advised otherwise.”