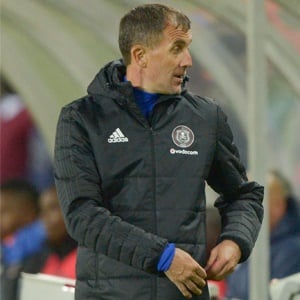 Cape Town - Orlando Pirates head coach Milutin Sredojevic believes his players are showing respect for the club's badge and giving their all in every match.

'Micho' returned to the club this season after a previous spell nearly a decade earlier and has taken the Buccaneers to second spot on the table just before the halfway mark of the campaign.

Although the Serbian has admitted he would like to see his team scoring more goals, he is more than pleased with the attitude and character shown by his charges.

"I have a million and one reasons to have the feeling that I don't coach only human beings. I am coaching lions that really respect this badge, that respect the jersey they are playing for," he told KickOff website.

"They giving all out. I have seen in their facial expressions, I have seen their body language, I have seen on the field of play that each player has given his best," Sredojevic continued.

Sredojevic understands, however, there is always room for improvement: "We are a work in progress. I want to tell you we have reached quite far in terms of defending.

"In our build up, in our creating chances that last product is missing and I really regret it. But I am not taking away one percent from the effort that the players have put on the field of play."

We live in a world where facts and fiction get blurred
In times of uncertainty you need journalism you can trust. For only R75 per month, you have access to a world of in-depth analyses, investigative journalism, top opinions and a range of features. Journalism strengthens democracy. Invest in the future today.
Subscribe to News24
Related Links
Sredojevic confident Bucs' strategy is working
Former Buccaneer says Pirates are on track
Micho credits SuperSport's experience
Next on Sport24
Da Gama: Anything against Pirates is a blessing