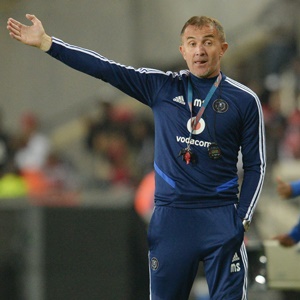 The Sea Robbers were well below par in the contest as a brace from Bradley Grobler was followed by a third for Lungu Ghampani.

Nonetheless, Sredojevic was very remorseful after the match as he bemoaned missed chances but ultimately accepted responsibility for the defeat.

He told SuperSport TV: "A tough competitive match, we owe our supporters an apology after losing in this fashion.

"Maybe the crucial moment of the game happened we conceded the first goal, we were risking there [at the back] and that put us in a position to go into the risk.

"At half-time we put on [Thembinkosi] Lorch and [Luvuyo] Memela more in offence, still not fully ready. We were putting balls in the right areas but we not effective. Something, somewhere is not okay in our attacking part.

"We were opening spaces, the opponent scored in those spaces. We were fighting until the end to find the goals but we did not succeed.

"In anyway, I'd like to take the responsibility of this loss to myself. We need this 72 hours [before] our match against Highlands Park to regroup, go back to the drawing board and analyse. We need to inject new energy, have a shock therapy in a way. The second match of the season, but this is happening. Pirates had chances."

We live in a world where facts and fiction get blurred
In times of uncertainty you need journalism you can trust. For only R75 per month, you have access to a world of in-depth analyses, investigative journalism, top opinions and a range of features. Journalism strengthens democracy. Invest in the future today.
Subscribe to News24
Related Links
Mkhize pens new 3-year deal with CT City
Ntiya-Ntiya agrees contract extension with Chiefs
Klopp lauds 'incredible' Adrian's flying start to Liverpool career
Next on Sport24
Gavin Hunt on Kaizer Chiefs win: 'We're starting to look like a proper football team'