Mokwena confirms fallout between Sundowns coaching trio: 'There are going to be squabbles' 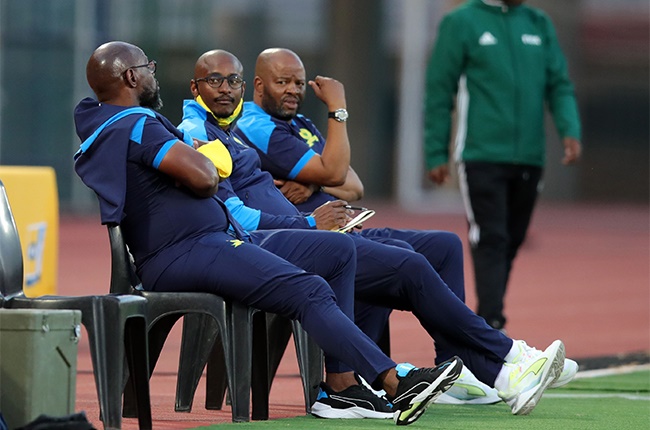 Mamelodi Sundowns co-coach Rulani Mokwena candidly admitted on Thursday that there was a "squabble" between the club's coaching trio.

The development came as a shocking surprise to the football fraternity as they guided Masandawana to the inaugural DStv Premiership title last season.

Ahead of Sundowns' much-anticipated league encounter against rivals Kaizer Chiefs on Sunday, Mokwena confirmed the fallout between the coaching trio.

However, the coach is more concerned about who the person in the Masandawana camp is that revealed incident to the South African media.

"I read the article and was expected this question already," Mokwena said.

"It's a difficult one to answer; it's also difficult to come across as not being honest. But at the same time also to protect the club as we've got a very, very big game at the weekend.

"Our focus and our energies must be on that.

"That is probably the biggest issue, having a mole and having people that report certain things to the media.

"We shouldn't have people in our club that go about that sort of behaviour, and that should not be allowed.

"In any organisation, any household, if ever there are any relations, of course, there is going to be one or two squabbles or disagreements.

"Those should not be blown out of proportion. You know I get disappointed personally when I am on the other side, and to be honest with you, maybe this question should be posed to coach Manqoba Mngqithi.

"Because what was reported in the media, there is an element of truth to it, but for me, the coach apologised, and we moved on

"It's important for Mamelodi Sundowns to move on, and I have nothing further to add."

Meanwhile, the Masandawana hierarchy placed Mngqithi in charge of making the final decisions as far as club matters are concerned.

Komphela was then lured from Golden Arrows as a senior coach, and the trio delivered the title in their first season working together.

However, reports further unveiled that the fallout between the coaches led to Komphela almost jumping ship and joining Orlando Pirates.

Komphela has since denied those reports, insisting that he will remain at Chloorkop.

Sundowns are seeking a fifth consecutive league title, and a victory against arch-rivals Amakhosi will be a step in the right direction.