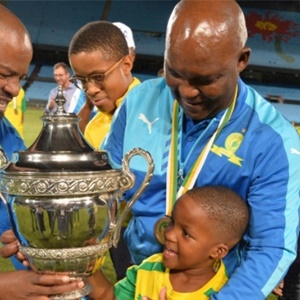 Sundowns have won the league twice in the last four seasons - making it seven titles for them in the PSL-era - while also claiming the CAF Champions League, CAF Super Cup, Telkom Knockout and Nedbank Cups.

Mosimane is confident the Tshwane giants are on the right track.

"You can't outdo Chiefs and Pirates' history. A lot of children inherit their support for them through their parents," he told the Sowetan website.

"So it will always grow but you can also grow with it by winning. That's why they will always be bigger. You have to win the big trophies and play in the bigger spaces to influence fans."

Mosimane is determined to leave a legacy of not only winning trophies, but also increasing the club's support in Mamelodi, the township situated close to Pretoria.

"Look at Mamelodi for instance‚ it has Chiefs and Pirates fans too. We are trying to have a bigger influence there," he said.

"That's why when we win‚ we always go there to parade the trophy. Nothing gives me joy than seeing children in Sundowns jerseys in Mamelodi. It's unbelievable.

"That's how you grow your support base. The trophy says we are stronger than them (Chiefs and Pirates)‚ we have seven league titles. But we need to do more to get the fans like them."

We live in a world where facts and fiction get blurred
In times of uncertainty you need journalism you can trust. For only R75 per month, you have access to a world of in-depth analyses, investigative journalism, top opinions and a range of features. Journalism strengthens democracy. Invest in the future today.
Subscribe to News24
Related Links
I'm staying at Real - Ronaldo
Khuzwayo getting the right advice
The 'sky's the limit' for Modise
Next on Sport24
OBITUARY | Abdul Bhamjee: 'Mr Soccer' left the game too soon