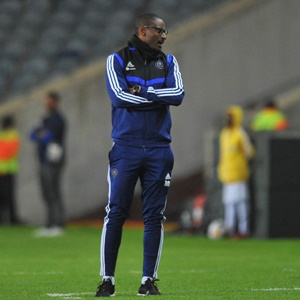 A section of the Buccaneers faithful have voiced their displeasure in the wake of the team's 2-2 draw against Baroka on Saturday and urged the club to sack the 34-year-old head coach.

Nyirenda believes it would be a rash decision to get rid of the young tactician because his team's performances have shown signs of promise.

"I think the young man is doing a good job," Nyirenda told the media.

"And if you cannot see it I don't know what to say to you. Pirates are playing good football and you see what this young man is trying to do."

Pirates are sixth in the Absa Premiership standings with exactly half as many points as bitter rivals Kaizer Chiefs, who enjoy a 10-point lead at the top of the table.

Yet Nyirenda is adamant that he sees great potential in Mokwena and believes he will one day achieve 'great things' with Bucs.

"Every coach has his own style of play. He took the team in the middle of the war. He did not have time prepare and people need to be patient," he added.

"I see great things coming for Pirates under Mokwena."

We live in a world where facts and fiction get blurred
In times of uncertainty you need journalism you can trust. For 14 free days, you can have access to a world of in-depth analyses, investigative journalism, top opinions and a range of features. Journalism strengthens democracy. Invest in the future today. Thereafter you will be billed R75 per month. You can cancel anytime and if you cancel within 14 days you won't be billed.
Subscribe to News24
Related Links
Hodgson hails Riedewald's professionalism
Klopp won't sacrifice European campaign for Premier League
Arsenal have 'a lot of work to do', says relieved Ljungberg
Next on Sport24
Controversial Afcon referee chosen to officiate Pirates' Confed Cup final