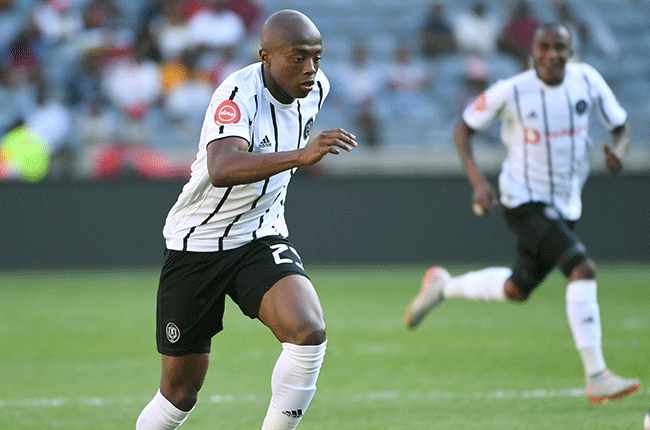 Vincent Pule opened the scoring for Bucs with an excellent shot on 29 minutes. Luke Fleurs pulled a goal back with his header on 41 minutes but Zakhele Lepasa came off the bench to score the winner with his first touch.

SuperSport may well have won the tie, but both Bradley Grobler and former Pirates striker Thamsanqa Gabuza both had penalties saved by Wayne Sandilands.

Matsatsantsa were on top early on with Guily Manziba firing in a close-range volley from a cross from the left that Sandilands managed to smother.

SuperSport were applying some good early pressure as Pirates looked to play out from the back. Bucs were settling into a good passing rhythm but without really threatening.

Pirates had Sandilands to thank again, for denying Jamie Webber, after a neat one-two with Teboho Mokoena, from just outside the box.

Grobler's shot on 17 minutes was deflected out for a corner while Ronwen Williams made a strong save to deny Gabadinho Mhango from just inside the area after a slip from centre back Thatayaone Ditlhokwe to let him in on goal.

A number of balls into the box was causing problems for the Bucs' defence but it was Pirates to take the lead on 29 minutes.

An excellent shot into the bottom-right corner of the net from range from Pule followed some good approach play and a neat touch from Thembinkosi Lorch to set up his teammate.

It was an increasingly open first half, with both sides looking to get forward, and a curling, dipping shot from Mokoena was tipped over the bar by Sandilands, although the shot looked to be just heading over the target.

Aubrey Modiba curled a 40th minute effort just wide of the Bucs' left-hand post via a deflection as SuperSport ended the half well - culminating in a super equaliser. Fleurs came in at the back post to get between two defenders and his head to Webber's corner to power the ball home.

Grobler almost caught Sandilands flatfooted with a snapshot from inside the area after a slow start to the second half, but the keeper was equal to the task.

Grobler then forced Sandilands into a smart reaction save to stop his header, after some strong running from Sipho Mbule ahead of his pinpoint cross.

Bucs made a double substitution just before the hour mark, with Lepasa making an immediate impact as he slotted home from close range after a super through ball from Lorch.

Lunga Ghampani had only just been introduced by SuperSport and his first piece of action was to win a penalty after being brought down by Maela - although replays showed the initial contract was made outside the box.

Grobler stepped up to take the kick but his poor penalty straight down the middle was saved by the outstretched foot of Sandilands.

SuperSport had a second chance to level from the spot but this time Gabuza's slotted shot was easily saved by Sandilands down to his left. Modiba had been clipped by Ntsikelelo Nyauza as Mbule played the ball into his teammate inside the box.

Modiba then smashed a 76th minute free-kick well off target as SuperSport looked to find a leveller but despite a number of set-pieces, it was Pirates who saw out the game for a much-needed three points.

We live in a world where facts and fiction get blurred
In times of uncertainty you need journalism you can trust. For only R75 per month, you have access to a world of in-depth analyses, investigative journalism, top opinions and a range of features. Journalism strengthens democracy. Invest in the future today.
Subscribe to News24
Related Links
WRAP | Absa Premiership
Manchester United captain Harry Maguire's story contradicted by taxi driver
Golden Boot award 'will boost my CV', says Highlands star striker Peter Shalulile
Next on Sport24
Moses Mabhida to host MTN8 Cup final