Sundowns advanced to the final of the tournament with a thrilling 3-2 win over Bidvest Wits, which included late goals from two different subsitutes, Lyle Lakay and Keletso Makgalwa.

"He [Lakay] helped us there and Keletso also, you know the two super-subs. We could not stay on with the big-name players, Themba Zwane and [Sibusiso] Vilakazi," Mosimane said after the game.

"You know we needed the super-subs and it's a lesson to everybody to say, you need the depth to continue on this thing."

"So, we are saving them for the game on Tuesday and I told the guys if they think this is stress, the serious stress is coming on Tuesday but at least we are in the final. That's what is important for us, the team fought, and yeah it's a good spirit," he said.

"But you can see we are not the same, we don't have the flow, we don't play as good as we always play but it's a cup match and it's football under Covid-19.

"After not playing football for four months and we score three goals - I think that's the positive side of it."

Speaking after the match, the experienced Clever Boys manager said they are now turning their focus to the league clash against the PSL log leaders, Kaizer Chiefs, on Wednesday night at FNB Stadium.

Wits coach Gavin Hunt cut a downcast figure after the match and could only lament the side's tough luck this season.

"That's our life and story at the moment, it's our lives at Bidvest Wits at the moment. So, yeah we'll pick ourselves up, try and go again on Wednesday," Hunt said.

"Look, I can't get involved in that debate [on whether Mhlongo is to blame for the third goal or not], those are bad mistakes, in the two last goals in my point of view…the first goal as well.

"You know you really have to question some of the decisions but that's football and that the way our life at Bidvest Wits is at the moment, you know and I feel for the players.

"As I said they don't deserve it but we lost to a better team. We had them, we wanted them, but we didn't take advantage of the situation.

"You can't concede goals like that, certainly all three of them. But I'm not going to finger any blame here."

We live in a world where facts and fiction get blurred
In times of uncertainty you need journalism you can trust. For only R75 per month, you have access to a world of in-depth analyses, investigative journalism, top opinions and a range of features. Journalism strengthens democracy. Invest in the future today.
Subscribe to News24
Related Links
Football restarts in virus-hit South Africa with Bloem Celtic, Mamelodi Sundowns victories
'Enormous anticipation' as Bayern plot Barcelona defeat in Champions League
Man Utd, Inter favourites for Europa League in unique German finale
Next on Sport24
Gavin Hunt on Sundowns' new-look technical team: 'You can't judge after just one game' 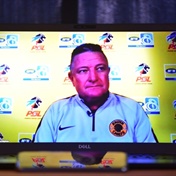