Pitso: Our players are wanted 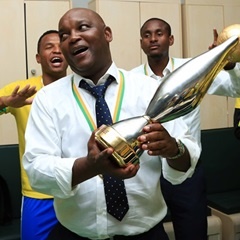 The former Bafana Bafana mentor led his side to a Cup double triumph with claiming the PSL title and the CAF Champions League.

However, with his players performing so well it has raised interest from club’s abroad.

Khama Billiat as well as Keagan Dolly have been on the radar of several European club’s.

Mosimane admits that keeping his star players at Chloorkop beyond this season will be a difficult task.

"When your players are not wanted then there’s a problem. The ladies can tell you, they like the guys having a look at them…it’s nice to be wanted, but it doesn’t mean you have to accept everything.

"But it means you are recognised, that’s beautiful, so we are happy that everybody is wanted and recognised."