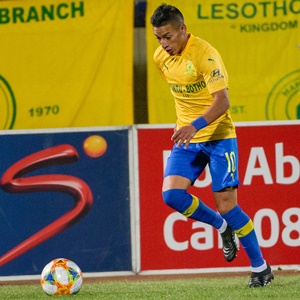 The Brazilians were found guilty of bringing the League in disrepute while Sirino was found guilty of assaulting two SuperSport United players, Dean Furman and Clayton Daniels.

The DC has ruled that: Mamelodi Sundowns is ordered to pay a fine R200 000 of which R150 000 is suspended for a period of 24 months on condition that they are not found guilty of a similar offence during the period of suspension.

"Gaston Sirino is ordered to serve a two-match suspension.

"Sirino is ordered to pay a fine of R75 000 of which R25 000 is suspended for a period of 24 months on condition that they are not found guilty of a similar offence during the period of suspension.

"Both Mamelodi Sundowns and Sirino are ordered to pay the several sittings of the Disciplinary Committee," a PSL statement said.

The incident in question took place during an MTN8 clash between the two sides on 18 September, 2019 with SuperSport United 2-0 victors.

This means that the PSL DC took an astonishing 7 months and 23 days to hand out a sanction after the Sundowns attacker was seen to strike out at the two players.

We live in a world where facts and fiction get blurred
In times of uncertainty you need journalism you can trust. For only R75 per month, you have access to a world of in-depth analyses, investigative journalism, top opinions and a range of features. Journalism strengthens democracy. Invest in the future today.
Subscribe to News24
Related Links
Real Madrid return to training ahead of planned La Liga restart
Crisis club once home to Cannavaro quits Chinese Super League
Premier League presses on with 'Project Restart' despite mounting problems
Next on Sport24
Siphiwe Tshabalala: It's a new chapter for me