Rhulani Mokwena: 'We are in sync when we have Peter Shalulile' 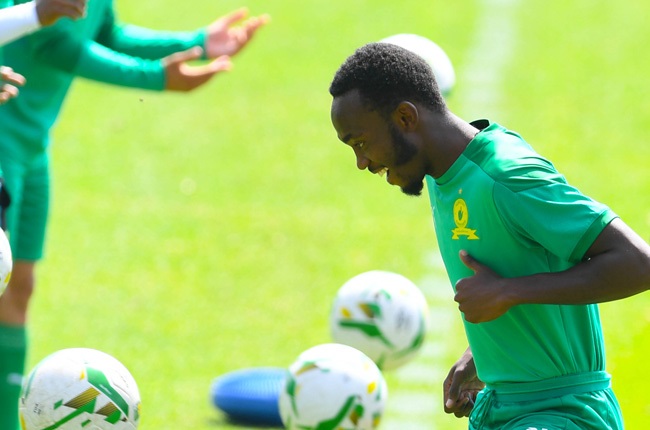 Mamelodi Sundowns co-coach Rhulani Mokwena says Peter Shalulile is a "top professional" and plays a crucial part in the way the Brazilians want to play.

The Namibian international signed from Highlands Park (now TS Galaxy) for an undisclosed fee and has been a revelation for the Yellow Nation since his arrival at Chloorkop.

The 27-year-old has dialled up more than 2 000 minutes in a Brazilian shirt this season and has 14 goals and six assists in all competitions to his name thus far.

"Peter is a top professional," Mokwena told the media ahead of Sundowns' mouth-watering Nedbank Cup quarter-final encounter against Orlando Pirates on Thursday.

"You run out of superlatives when you want to describe Peter's character. I remember having a discussion with Allan Freese just prior to Peter coming to us, and Freese's words were 'he will die for you guys on the pitch'.

"For a team that presses from the top, with the strikers that we have, we need not just tactical direction with our high press; we also need an injection of speed and aggression."

Masandawana are currently leading the DStv Premiership by six points with two matches in hand, and Shalulile is third (nine goals) on the top scorer's list, breathing down the necks of leader Bradley Grobler (13) and second placed Ruzaigh Gamildien (11).

Mokwena adds that Shalulile is the type of player Sundowns always wants to have within their ranks.

"He triggers it by directing it tactically because there are certain pressing targets that we always have in every opponent, but at the same time, he also injects the intensity and aggression into our press which is very important.

We live in a world where facts and fiction get blurred
In times of uncertainty you need journalism you can trust. For only R75 per month, you have access to a world of in-depth analyses, investigative journalism, top opinions and a range of features. Journalism strengthens democracy. Invest in the future today.
Subscribe to News24
Next on Sport24
Stadium change affected AmaZulu says Benni McCarthy after Baroka defeat