Sundowns come from behind to claim Telkom Knockout 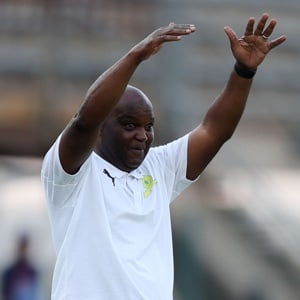 Cape Town - Mauricio Affonso was the hero on the day as Mamelodi Sundowns rallied from behind to record a 2-1 victory over a stubborn Maritzburg United in the Telkom Knockout final in Durban on Saturday evening.

The Team of Choice went into the half-time break with a slender lead thanks to Judas Moseamedi's 40th-minute goal, but Sundowns bounced back in the second period as Affonso bagged a brace to help the reigning Premiership champions to victory.

Maritzburg started the match on the front foot as they went in search of an early goal, and they very nearly got the breakthrough they were looking for in the sixth minute as Miguel Timm saw his goal-bound shot blocked by the defence.

They continued to press forward and Sundowns were lucky to escape unscathed in the 15th minute as both Mxolisi Kunene and Keagan Buchanan were denied by the defence, before Daniel Morgan headed wide of the mark at the back post.

Sundowns took a while to get going and eventually lodged their first shot on goal just after the half-hour mark, only for the Maritzburg defence to deflect Gaston Sirino's effort behind for a corner.

Masandawana again went close a few minutes later as Sirino whipped curling cross into the danger area, but Affonso was unable to capitalise as he fluffed his lines, letting Maritzburg off the hook.

And Downs were made to rue that missed opportunity as Maritzburg went on to claim the lead in the 40th minute, Moseamedi nipping in front of his marker at the last second before lifting the ball over the onrushing Denis Onyango from the edge of the area.

Maritzburg managed to hold on in the remaining minutes of the first period, but they struggled to match their opponents after the break.

Sundowns were back on level terms in the 54th minute as Affonso rose above his marker to head home at the back post after Sirino's ball into the box.

Pitso Mosimane's men should have claimed the lead 12 minutes later, but Affonso failed to hit the target as his header flashed wide of the target.

But he did not disappoint in the 74th minute as he fired Sundowns in front with a headed goal from yet another sumptuous Sirino cross.

There was one more nervy moment for Sundowns later on, however, after Bandile Shandu raced through on goal with only the keeper to beat. However, Onyango was alert to the danger and did well to deny Shandu's tame effort on goal, ensuring the win for Sundowns.

We live in a world where facts and fiction get blurred
In times of uncertainty you need journalism you can trust. For 14 free days, you can have access to a world of in-depth analyses, investigative journalism, top opinions and a range of features. Journalism strengthens democracy. Invest in the future today. Thereafter you will be billed R75 per month. You can cancel anytime and if you cancel within 14 days you won't be billed.
Subscribe to News24
Related Links
Leicester's winning run ends against Norwich
Chelsea rocked as Gosling gives Bournemouth shock win
WRAP | English Premiership
Next on Sport24
Pitso wants to 'give back in a meaningful way', set to launch soccer schools project in SA