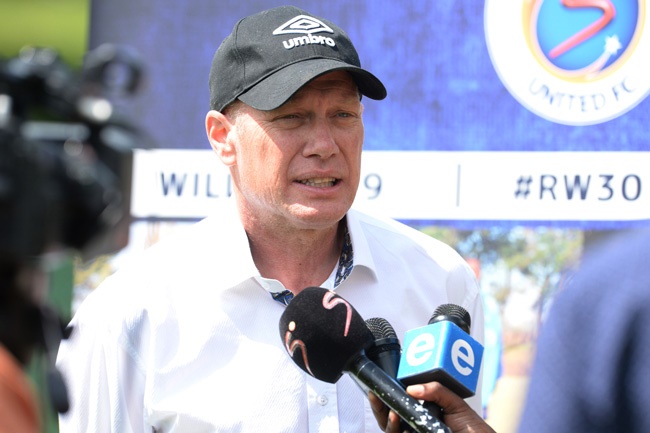 Widespread rumours that consistently successful SuperSport United are in the market to sell their DStv Premiership franchise are the product of mischief makers and speculators, according to CEO Stan Matthews.

"I keep being approached with the issue," said the club's long-time official, "and, quite frankly, I'm beginning to find it more than a little irritating having to respond that there is no truth to the rumours."

Matthews said the matter had probably been ignited by the fact that SuperSport's sister organisation, DStv, had replaced Absa as the sponsors of the PSL's Premiership - "and this has set tongues wagging."

"In addition," added the SuperSport CEO, "there are a number of soccer officials sniffing around with the objective of purchasing a place in the PSL's Premiership, but we have no intention of obliging the mischief makers.

"What is more, the club has a proud record since coming into existence 27 years ago after purchasing the Pretoria City franchise, winning the PSL League three times, the Nedbank Cup five times, the MTN Eight three times and completing a clean sweep of top PSL titles with a Telkom Knockout success - and our parent organisation continues to confirm its appreciation over our success on the pitch and the importance we are playing with one, if not the best development programme in the country."

Where SuperSport United may be somewhat irked, in the circumstances, is the failure to amass a substantial complement of supporters for their home matches at the Lucas Moripe Stadium in Pretoria's Atteridgeville enclave.

And Matthews confirmed that following on Bidvest Wits' sale of their Premier League franchise prior to the start of the current season, there had been discussions over the possibility of using the Wits University Soccer Stadium for home matches.

"But unfortunately we could not come to financial terms with the university over the use of their soccer stadium," said the SuperSport CEO, "and the talks have since been abandoned."

We live in a world where facts and fiction get blurred
In times of uncertainty you need journalism you can trust. For only R75 per month, you have access to a world of in-depth analyses, investigative journalism, top opinions and a range of features. Journalism strengthens democracy. Invest in the future today.
Subscribe to News24
Related Links
Kermit Erasmus hails ruthless Sundowns: 'We hope to continue this way'
HIGHLIGHTS | Kaizer Chiefs outclassed in CAF Champions League
HIGHLIGHTS | Sundowns' flowing football inspires impressive CAF Champions League win
Next on Sport24
Kaizer Chiefs have 'no knowledge' of plans to sack Gavin Hunt and re-sign Stuart Baxter