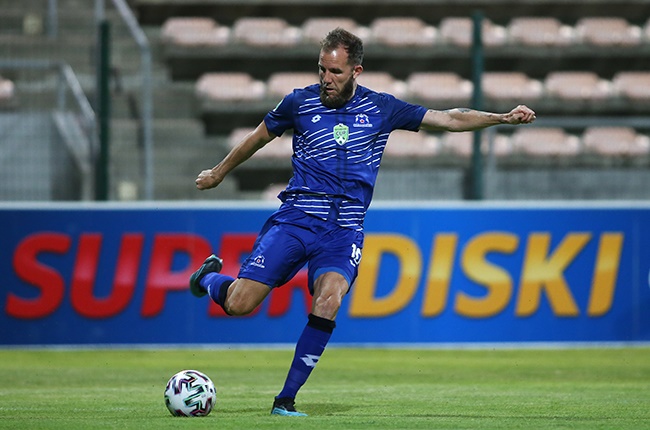 Jeremy Brockie of Maritzburg United sends in a cross during the Nedbank Cup, Last 32 match between Stellenbosch FC and Maritzburg United at Athlone Stadium on February 07, 2020 in Cape Town, South Africa.
Shaun Roy

Head coach Kaitano Tembo on Wednesday put an end to any speculation of a possible return for former striker Jeremy Brockie by confirming that SuperSport United will not be making any more additions to their squad.

SuperSport welcome Black Leopards to the Lucas Moripe Stadium in their 2020/2021 PSL opener on Saturday.

Speaking ahead of the match, the 50-year old dismissed any talk of the club making any more signings after having been constantly linked with Brockie.

"As far as new signings are concerned I think Lucky Mohomi was our last signing," Tembo confirmed.

"At the moment we don't have the budget because of the financial implications due to the Covid-19 pandemic. There are no funds for us to go out there in the market and recruit players.

The New Zealander lit up the league during his time at the club scoring a prolific 41 goals in 105 appearances in all competitions with Tembo refusing to completely rule out a return.

"Unless something really unlikely happens, for now, we'll have to do with what we have in terms of our squad."

We live in a world where facts and fiction get blurred
In times of uncertainty you need journalism you can trust. For only R75 per month, you have access to a world of in-depth analyses, investigative journalism, top opinions and a range of features. Journalism strengthens democracy. Invest in the future today.
Subscribe to News24
Related Links
Kaitano Tembo: SuperSport aiming to make positive start against Leopards in PSL opener
Erasmus wants to stay fit and score 30 goals for Sundowns
WRAP | Champions League
Next on Sport24
Da Gama: Anything against Pirates is a blessing