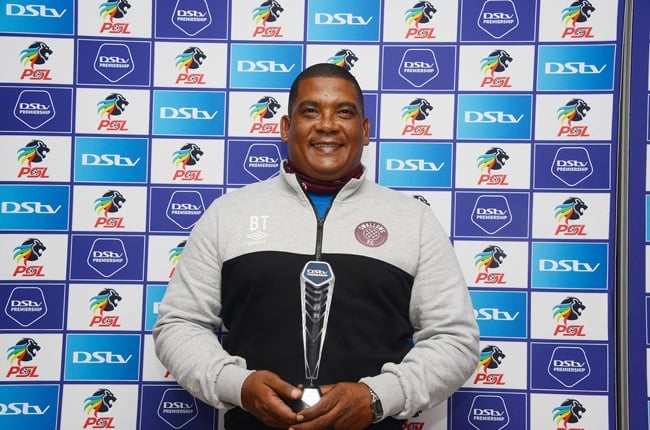 Swallows FC head coach Brandon Truter says that Mamelodi Sundowns remain favourites to win the DStv Premiership as the two sides meet on Saturday in a top of the table encounter.

The Dube Birds had the opportunity to go top of the log on Wednesday evening but Chippa United held the Sowetan side to a 1-1 draw.

However, Truter brushed aside the pressure of going ahead of the Brazilians and insisted that it was victory but had to settle for a point against the Chilli Boys.

“It wasn’t about going top (of the log), it was about getting the three points here today. (I am) A bit disappointed the way we conceded a goal, but it was two beautiful goals (Ruzaigh) Gamildien and Kurt (Lentjies) as well,” he told SuperSport TV.

“Chippa is never an easy team to play against and Dan (Malesela) is a coach that likes the ball and they had there moments. We controlled (the game) in the last period but to give a goal like that away off a set play is disappointing. We managed to get an early goal but then we took our foot off the pedal.”

Truter further highlighted that Swallows are not title favourites and that all the pressure will be on Masandawana on Saturday.

“It’s forty eight hours to our next game, fatigued, tired legs… we are not in the position like our opponents for the next game that we can rotate with all the quality that they have so it’s a massive task for the technical team to get the best possible eleven available for Saturday,” he said.

“They are still league title contenders I maintain and they are our next game but we also know that they had an extra day to rest it plays a huge part people don’t know the human body takes 72 hours to recover and they had 72 hours where we only had 48 hours. So, the pressure is on them, they should win it.”

We live in a world where facts and fiction get blurred
In times of uncertainty you need journalism you can trust. For only R75 per month, you have access to a world of in-depth analyses, investigative journalism, top opinions and a range of features. Journalism strengthens democracy. Invest in the future today.
Subscribe to News24
Related Links
Josef Zinnbauer rues unlucky Orlando Pirates in goalless draw against Arrows
Stellenbosch launch late fightback but Baroka take the spoils
Swallows FC held by Chippa United to extend unbeaten run
Next on Sport24
PREVIEW | Orlando Pirates out to derail Sundowns' dominance in blockbuster Nedbank Cup 'final'