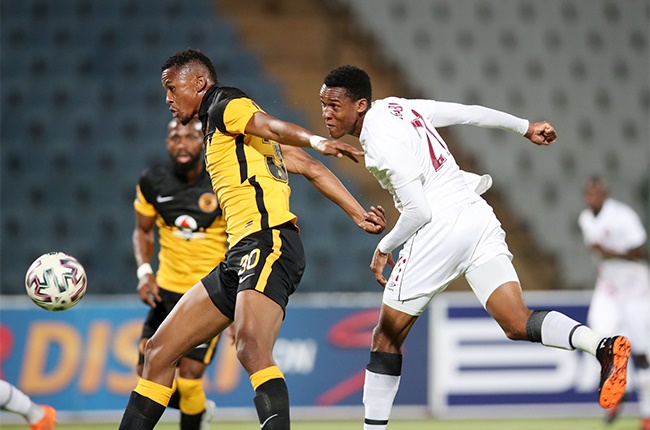 Swallows FC went top of the Premiership standings with an impressive 1-0 win over Kaizer Chiefs thanks to a goal by substitute Joseph Mhlongo at Dobsonville Stadium on Tuesday.

Chiefs struggled in the opening exchanges to get a foot on the ball with Swallows applying more of the pressure in search of an opener.

Swallows continued to apply increasing pressure on their opponents and spent the majority of the first-half parked just outside the Chiefs 18-yard area.

Gavin Hunt's side grew into the game and somewhat against the run of play nearly took the lead on two occasions just before the break.

Left-back Philani Zulu was unlucky not to score in the 43rd minute when he struck an effort from distance that struck the frame of Swallows goalkeeper Virgil Vries' post before being cleared.

Two minutes later in the 45th minute Chiefs had the ball in the back of the net as defender Daniel Cardoso bundled the ball over the line from close range but was adjudged to have fouled Vries.

The two sides went into the break deadlocked with nothing separating the two teams.

Both teams came out with an attacking intent in the second period but failed to create any real chances immediately after the break.

Swallows had their appeals for a penalty waived away in the 56th minute when Lebogang Mokoena was brought down in the Chiefs penalty area.

Chiefs made a double change in the 70th minute with Bernard Parker and Njabulo Blom coming on in place of Manyama and Ngcobo. Swallows responded with a double change of their own as Gamildien and Mbokoma were replaced by Mahlatsi and Joseph Mhlongo.

The change proved to be inspired by head coach Brandon Truter as Mhlongo gave Swallows a vital lead in the 86th minute. The substitute beat his marker at the far post to get on the end of a dangerous cross and steered his effort beyond Itumeleng Khune.

That's how matters finished with the newly-promoted Swallows going top of the league standings and Chiefs in 11th.

We live in a world where facts and fiction get blurred
In times of uncertainty you need journalism you can trust. For only R75 per month, you have access to a world of in-depth analyses, investigative journalism, top opinions and a range of features. Journalism strengthens democracy. Invest in the future today.
Subscribe to News24
Related Links
Firmino is key player in Liverpool 'orchestra', says Klopp
Aguero won't be rushed back, says Man City boss Guardiola
WRAP | Champions League
Next on Sport24
Kaitano Tembo expecting tough encounter as SuperSport face unbeaten Swallows