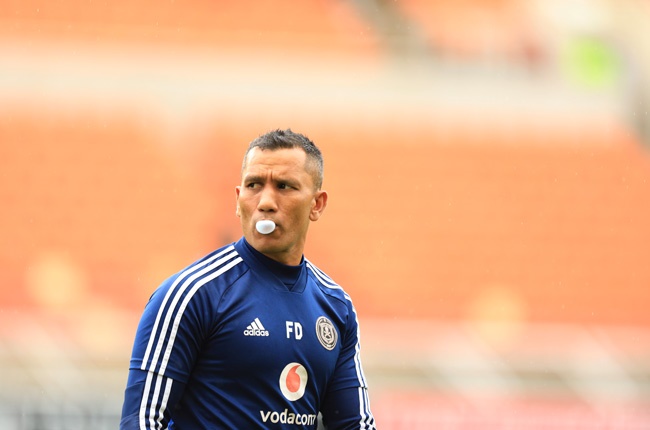 The Buccaneers beat their Soweto rivals at Orlando Stadium last week and now Amakhosi will look to turn around the three-goal deficit on Sunday at the FNB Stadium.

Pirates will be without head coach Josef Zinnbauer as the German coach attends to family matters with his son recovering from a car crash.

Davids has been keeping tabs on the usual coaching duties and reveals that Zinnbauer, while in Germany, calls at least three to four times a day to check in.

While the Buccaneers have the advantage going into Sunday's match as favourites to progress to the final, Davids is not going to be fooled that a comeback cannot happen.

"We know, we have to approach the game, not going into it complacent,” Davids told the media on Friday.

"Not think already with one hand in the final, no. We approach the game with this semi final with the score at zero-zero.

"If you approach the game wanting to score and not immediately going to defend the 3-0 scoreline, that is the approach we want to take and that is how we will start the match.”

"In the last game of the season, they lost the league. And that is how we approach them, we see them exactly as the same team… they only lost one player, George Maluleka (to Mamelodi Sundowns).

"They have got exactly the same squad. Yes, a different technical team, a different coach but we know their strengths. We know how dangerous they can be and especially with an experienced coach like Gavin Hunt. He is going for goals; you know they can immediately turn the game around.”

We live in a world where facts and fiction get blurred
In times of uncertainty you need journalism you can trust. For 14 free days, you can have access to a world of in-depth analyses, investigative journalism, top opinions and a range of features. Journalism strengthens democracy. Invest in the future today. Thereafter you will be billed R75 per month. You can cancel anytime and if you cancel within 14 days you won't be billed.
Subscribe to News24
Related Links
Maduka: As defending champions the pressure is on SuperSport
Gavin Hunt 'can turn nothing into something', says Daine Klate
Mamelodi Sundowns part ways with technical director Jose Ramon Alesanco
Next on Sport24
Orlando Pirates' mission to Nigeria sees PSL reschedule final 3 league fixtures