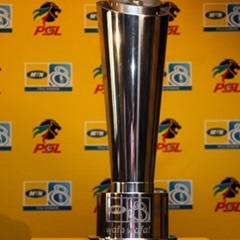 This year’s final will pit Cape Town and Gauteng clubs against each other.

Ahead of Saturday’s MTN8 final in Durban, the big question is, will Benni McCarthy or Eric Tinkler be the last coach standing?

In other words, between Cape Town City and SuperSport United, which will take home the prize?

While the victors will pocket a whooping R8 million, reaching the final is enough for the losing team as they will walk away with the same amount of money, like the clubs that were knocked out in the quarterfinals did – each one received
R800 000.

Both coaches are new at their respective clubs and winning the first trophy of the season will be a perfect start to their reigns. But there can only be one victor.

The fact that Tinkler knows City like the back of his hand may work in his favour. Until three months ago, Tinkler was at the helm of the Cape side, where he won last season’s Telkom Knockout.

He may claim he has their number, but that may also be far from the truth as McCarthy has transformed the side since taking charge. There are new playing personnel and they have already made a difference to the side.

Although many may argue that he inherited a well-oiled machine and is riding on Tinkler’s legacy, the truth is that McCarthy has already won the hearts of many as City have become the team to beat within a very short space of time.

City warmed up for the final with a convincing win over homeboys Ajax Cape Town in a Cape derby last weekend, while United laboured to a 1-1 draw against Tunisian side Club Africain in the Caf Confederation Cup.

The international break means both coaches have had two weeks to prepare for this important clash and to work on their players’ shortcomings.

Following a much-publicised foul-mouthed outburst, McCarthy will be advised to take his anger elsewhere.

United will have to be clinical in front of goals if they are to land this trophy.

This will be their second successive silverware win – ­following their triumph in the Nedbank Cup in June – if they go all the way. They go to the same venue where they lifted their last trophy, but can they get the same results?

They seem to have saved their best for this tournament – if their previous encounters are anything to go by.

Jeremy Brockie, who scored two goals against Maritzburg United in the semifinals, will be looking to add to his tally. Thuso Phala has also rediscovered his scoring form and could be the man to deliver the trophy.

McCarthy will, once again, look to Nigerian striker Victor Obinna to show his scoring prowess.

Obinna netted his first goal for the Citizens in the Cape derby and will be hoping for good things to come.

All the questions will be answered on Saturday evening at the Moses Mabhida Stadium in Durban.

We live in a world where facts and fiction get blurred
In times of uncertainty you need journalism you can trust. For only R75 per month, you have access to a world of in-depth analyses, investigative journalism, top opinions and a range of features. Journalism strengthens democracy. Invest in the future today.
Subscribe to News24
Related Links
Citizens see off Students to reach MTN8 final
A Wits treble for Benni’s City?
Maritzburg strike late to hold SuperSport
Next on Sport24
Goals hard to come by for Pirates in draw with Arrows