Kaizer Chiefs fans march to Naturena: 'We are tired of how you're handling our team' A small but vocal group of Kaizer Chiefs supporters were on Friday marching to Naturena to voice their concerns with the running of the club.

While the march is not aimed at under-pressure coach Gavin Hunt directly, the supporters took with them a memorandum highlighting a range of concerns they had over the current state of the club.

The memorandum called for an overhaul of the current squad, a renewed playing philosophy and bringing in coaches that could facilitate that philosophy.

After the supporters had arrived at Naturena where their concerns were vocalised, they were addressed by Kaizer Chiefs marketing director Jessica Motaung, who acknowledged the concerns and called for unity between the club and its supporters.

"As Kaizer Chiefs supporters, we have been watching our team in a downward spiral season after season with our trophy cabinet being filled up with nothing but empty promises," the memorandum read. 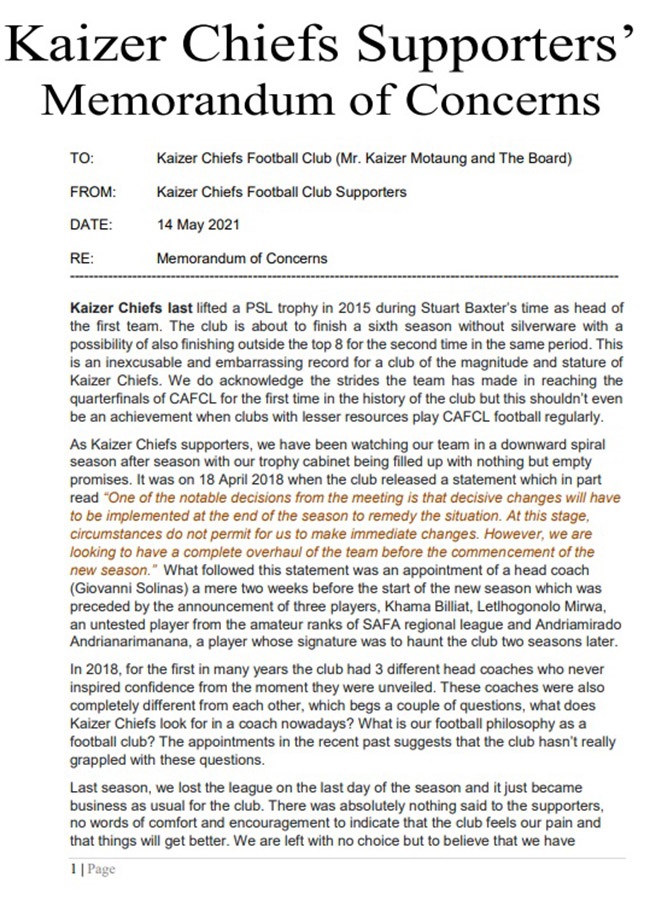 Motaung then signed the memorandum.

"We continue to ask you to share your thoughts with us, but to do it constructively on the platforms the club provides," she said.

"I'm not here to make promises ... I can't. It will be unfair. What we can do and what we commit to is to take these issues that you have tabled to the organisation's highest level to make sure they're attended to.

"We stand here with a common interest of wanting what's best at heart for Kaizer Chiefs. It's not about a struggle, a fight, or protest, it's about the club. We are AmaKhosi."

Under Hunt's leadership, Chiefs have endured a woeful campaign and they currently find themselves in 10th place on the PSL log with just six wins from 27.

Sport24 journalist Khanyiso Tshwaku is on the ground.

Here, we will be bringing you footage and updates from the march as it comes in.

They said it'll be a peaceful protest and certainly it's been so. Not the expected numbers, but it's clear they care.@Sport24newspic.twitter.com/PsqPSSXT4f

And @KaizerChiefs provided them with water. One of them just asked: "Are they bribing us with water?@Sport24news pic.twitter.com/3J4YaIfFVV