'We are not taking Chiefs lightly', says Benni McCarthy 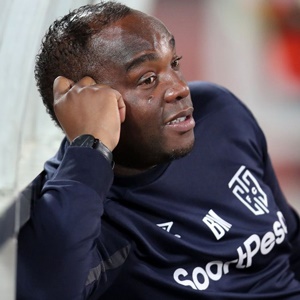 Cape Town - Cape Town City FC coach Benni McCarthy has hinted that he will play two upfront when his side host Kaizer Chiefs at Newlands Stadium on Tuesday evening.

Against Sundowns, City played a 4-5-1 with Abubaker Mobara, Thato Mokeke and Mpho Makola in central midfield and Kermit Erasmus as a lone striker.

And after the 1-1 draw with the Brazilians at Lucas Moripe Stadium last Tuesday, Mosimane admitted that it was a considered ploy to congest the centre of the park, because 'Sundowns like playing through the middle'.

But against Chiefs, McCarthy says he is going to adopt a less cautious approach and intends to take the game to the Amakhosi.

"I saw (Ernst) Middendorp sitting nicely with a big smile on the stands (against Mamelodi Sundowns)," said McCarthy.

"We are going to go back and prepare. It's another tough one but definitely, it's not going to be the same tactics you saw. We are not playing like that against Chiefs because Sundowns is Sundowns and that's another story on Tuesday.

"We're going to go and prepare well for Chiefs. We are not taking them lightly, they are a massive team, they are one of the biggest teams in the country. We respect them, we're going to give them respect, but what you saw against Sundowns was a once-off, you won't see that again."

We live in a world where facts and fiction get blurred
In times of uncertainty you need journalism you can trust. For only R75 per month, you have access to a world of in-depth analyses, investigative journalism, top opinions and a range of features. Journalism strengthens democracy. Invest in the future today.
Subscribe to News24
Related Links
'Coach Benni believes in me'
Radebe doesn't blame top SA coaches for dodging Bafana job
'Kekana has not been recognised enough', says Benni
Next on Sport24
PSL promotion play-offs' integrity thrown in doubt as Royal AM boycott ANOTHER match