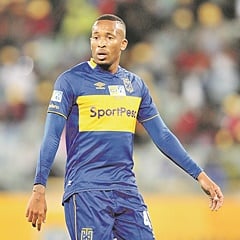 Johannesburg - It is not surprising that almost all the Premier Soccer League clubs have invaded the market to bolster their squads following the turbulent first half of the season.

If anything, the opening half called for drastic action from most of the clubs and they have duly responded.

Knowing that this is their last chance to tweak their sides before the final stretch, clubs have not wasted time in raiding the market to either keep themselves in the top flight, consolidate their positions or, most importantly, avoid the big drop to the lower league.

All the signed, sealed and delivered transfers so far

Kaizer Chiefs led as early as last month with the acquisition of Leonardo Castro from Mamelodi Sundowns.

With Chiefs struggling in the final third of the field, the Colombian striker is expected to hit the ground running.

Chiefs have also captured the services of the much sought-after Kabelo Mahlasela from Bloemfontein Celtic.

The move saw defender Lorenzo Gordinho going in the opposite direction on loan.

The arrival of the former Tsetse Fly midfielder should help Amakhosi in the creativity department, but coach Steve Komphela will have to manage expectations from the supporters.

Struggling defending champions Bidvest Wits were the busiest on the transfer market.

They not only tied up a few players for next season, but also brought in new ones as they seek to move away from the relegation zone.

Lehlohonolo Majoro headlines the new arrivals, who include Ghanaian international Edwin Gyimah and the returning Sifiso Myeni, who has been recalled from his spell on loan at SuperSport United.

German defender Denis Weidlich, who initially signed a precontract with The Students, will now join immediately from Maritzburg United. Defender Bokang Tlhone will be going in the opposite direction.

Thobani Mncwango and Robyn Johannes, from Polokwane City and Cape Town City, respectively, will join at the end of the season after signing precontracts.

The Students have parted ways with Steven Pienaar.

The former Bafana Bafana captain has failed to impress since joining at the beginning of the season.

Not to be left behind, Mamelodi Sundowns have also made a statement of their own by getting their long-term target Aubrey Ngoma from Cape Town City, who got defender Kwanda Mngonyama in return.

Ngoma’s arrival cast a shadow of doubt on the future of George Lebese, who has failed to command a regular place in the team since moving from Chiefs early in the season.

With the CAF Champions League and the Nedbank Cup still ahead, the Brazilians are expected to bring on two or more players before the end of the window period.

Orlando Pirates supporters are patiently waiting to hear who will join Diamond Thopola and Phetso Maphanga.

The Buccaneers have recruited two defenders so far, but supporters want more attackers on the team.

Chippa United coach Teboho Moloi has been reunited with Thabo Rakhale, who he worked with at Pirates.

The arrival of the skilful winger coincided with the departure of Menzi Masuku to Celtic. Chippa have also brought in Mxolisi Machupu and Linda Mntambo from Jomo Cosmos, and Nkosinathi Mthiyane from Pirates.

The Bloemfontein side has had two arrivals and one departure.

Besides Masuku, Phunya Sele Sele have also registered Gordinho from Chiefs, but have parted ways with Khethokwakhe Masuku.

Ndoro has also reunited with his former Pirates coach Muhsin Ertugral, and they will be hoping their combination will propel the Urban Warriors to the top.

Ajax struggled in the opening half of the season and will need Ndoro’s fire to reignite them.

The Citizens have also found Ngoma’s replacement in Surprise Ralane from Swedish outfit Helsingborg IF.

Polokwane City have bolstered their squad with the signing of Dominic Chungwa.