Xulu departed the club after two seasons with Chiefs during which time he struggled and made just six Premiership starts, despite the fact he'd arrived at Naturena with a good reputation.

The 25-year-old has since been handed the chance to revive his career in Pietermartizburg after the Team of Choice handed the centre-back a three-deal until 2020.

As such, Xulu says he is determined to fit in with his new teammates. He told Kickoff, "Obviously I haven't been training in a while and I have been training on my own and it's not the same. But first things first, I have to gel with the club.

"I have to see my new team-mates.I have to get along with the playing personnel of the club, which is not going to be difficult for me because I'm one player who strongly believes in his abilities."

Yet, the Durban-born star also hinted that he perhaps wasn't given a fair crack of the whip with Amakhosi, adding, "I don't think that it will take much time for me to adjust at the club. I'll go back where I just mentioned that I'm one player who believes in himself. And there's only one Siyanda and Siyanda, given a fair chance, can always compete."

We live in a world where facts and fiction get blurred
In times of uncertainty you need journalism you can trust. For only R75 per month, you have access to a world of in-depth analyses, investigative journalism, top opinions and a range of features. Journalism strengthens democracy. Invest in the future today.
Subscribe to News24
Related Links
Chiefs reject trialist Lurie
No approach made for Tyson say Wits
PSL fixtures released! Champions Wits open season
Next on Sport24
PREVIEW | Title rivals Kaizer Chiefs, Sundowns to clash in epic season opener 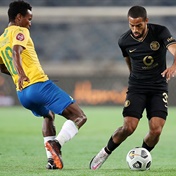