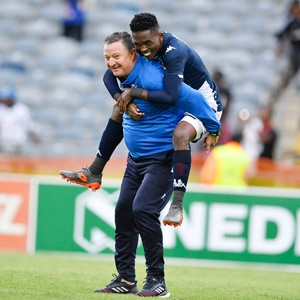 Johannesburg - Bidvest Wits equalised in the final minute of extra time to force a 3-3 draw, then beat Orlando Pirates on penalties Sunday in a Nedbank Cup last-32 thriller.

After Pirates failed to convert three spot-kicks and Wits fluffed two, Lorenzo Gordinho hammered his penalty into the net for a 3-2 shootout victory.

Zakhele Lepasa put Pirates ahead in the first half of extra time by converting a penalty just after Wits' Mozambican Elias Pelembe was sent off having been yellow-carded twice.

But with defeat looming, Wits salvaged a dramatic draw, then won a shootout in which the first two kicks were converted and the next four saved or missed.

"Competing in the CAF Confederation Cup this season made us mentally strong," said Wits coach Gavin Hunt. "The spirit in the team is fantastic."

Pirates German coach Josef Zinnbauer said: "I am very unhappy to be eliminated after coming from behind to lead. We had a big chance to reach the next round and threw it away."

Meanwhile, a 1-0 victory for Mamelodi Sundowns over SuperSport United in a Pretoria derby came at a heavy cost for the winners with Thapelo Morena suffering a season-ending injury.

Morena, who can operate in defence, midfield and attack, twisted his ankle making a tackle during the second half.

He had played a key role in the only goal after 24 minutes, winning the race to a long pass from Uruguayan Gaston Sirino and crossing for Sibusiso Vilakazi to tap in.

It was the fifth time the great rivals had met this season in all competitions and 2016 African champions Sundowns have won three and lost one.

Manyama retained possession when surrounded by two defenders before lobbing the ball over goalkeeper Edward Maova and into the net.

It was an unconvincing performance by league leaders Chiefs, the most successful club in South Africa with 54 major trophies, but without silverware for four and a half seasons.

"Playing lower division sides is always difficult because they sit back and try to catch you on the break," admitted Chiefs' George Maluleka.

The title defence of TS Galaxy, a second division outfit who stunned Chiefs 1-0 in the last final, did not last long as they crashed 3-0 at top-tier Chippa United in Port Elizabeth.

Nigerian Augustine Kwem scored twice in the closing stages after recent signing Ruzaigh Gamildien had put the home side ahead midway through the second half.