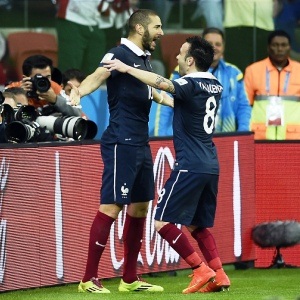 Porto Alegre - France have beaten 10-man Honduras 3-0 in a bruising World Cup clash on Sunday where goal-line technology awarded the first international goal in history, causing mayhem in the process.

As it happened: France v Honduras

Three minutes into the second period, the German-manufactured GoalControl system was called into action when a volley from Karim Benzema, who ended the night with two goals, came back off the post.

It bounced back into the area before hitting Honduras goalkeeper Noel Valladares with the ball then diverted back towards the goal.

The keeper tried to scoop the ball to safety, but Brazilian referee Sandro Ricci awarded the goal -- classed as an own-goal -- after consulting the instant technology.

France, whose 2010 World Cup was a footballing and public relations disaster, dominated the Group E match, twice hitting the woodwork in the first half.

First, Blaise Matuidi fired the ball towards the target but Valladares saved well and pushed the ball on to the crossbar.

Then, on the 23 minute mark, Antoine Griezmann, selected ahead of Olivier Giroud, climbed above the defence but headed on to the bar.

Stoke City midfielder Winston Palacios was yellow-carded for a brutal stamp on Pogba with the Frenchman also booked for a retaliatory kick.

Palacios was then red-carded in the dying moments of the half for another foul on Pogba inside the box.

Benzema converted the resulting penalty for his seventh goal in his last seven internationals.

The Real Madrid striker then played the crucial role in his team's historic second goal before striking his second of the night from a tight angle in the 72nd minute.

We live in a world where facts and fiction get blurred
In times of uncertainty you need journalism you can trust. For only R75 per month, you have access to a world of in-depth analyses, investigative journalism, top opinions and a range of features. Journalism strengthens democracy. Invest in the future today.
Subscribe to News24
Related Links
Last-gasp Swiss beat Ecuador
Bafana interest in Group F
England's Ox targets return
Next on Sport24
Germany's SWC debacle is 'huge motivation' - Mueller