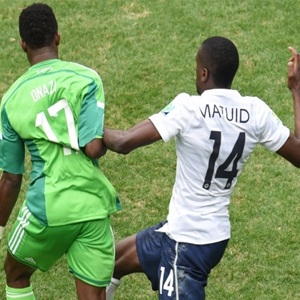 The tackle in question occurred during the second half of the match and Matuidi received only a yellow card for his challenge on Onazi.

Matuidi received no sanction from FIFA for the lunging studs up challenge which Diego Maradona described as worse than the Suarez bite.

Onazi, who plays for Italian Seria A side Lazio, who was stretchered off after the shocking challenge.

After being sent to hospital, it was revealed that the Nigerian had suffered a double fracture on his leg.

He snapped this pic of his leg in its cast.

Thanks to every one for your prayers, will be fine by his grace God bless nigeria. pic.twitter.com/8y2QNc9DM2

Matuidi, a stand out performer for France at the Soccer World Cup, apologised to Onazi both in public and in private for the challenge.

“I'm sorry, I didn’t go in to hurt him and I’m disappointed, as I’m not a bad player. I apologise. I went into the (Nigeria) dressing room afterwards to apologise," the French midfielder said.

The 21-year-old Super Eagle took to Twitter to accept the apology.

Hi @MatuidiBlaise thanks for your support and concern. Let the game go on. #WorldCup2014

He also thanked his fans for the support after the incident.

Thanks to you guys, my friends and fans for your love, support and encouragement. Hoping to do much better next time. #NaijaSuperFans

The Nigeria star is expected to be out of soccer for a lengthy period of time as he has a fractured tibia and fibula in his left leg.

We live in a world where facts and fiction get blurred
In times of uncertainty you need journalism you can trust. For only R75 per month, you have access to a world of in-depth analyses, investigative journalism, top opinions and a range of features. Journalism strengthens democracy. Invest in the future today.
Subscribe to News24
Related Links
Neymar recovering well
Moreno out for six months
Toure: No sympathy for Africa
Next on Sport24
Germany's SWC debacle is 'huge motivation' - Mueller