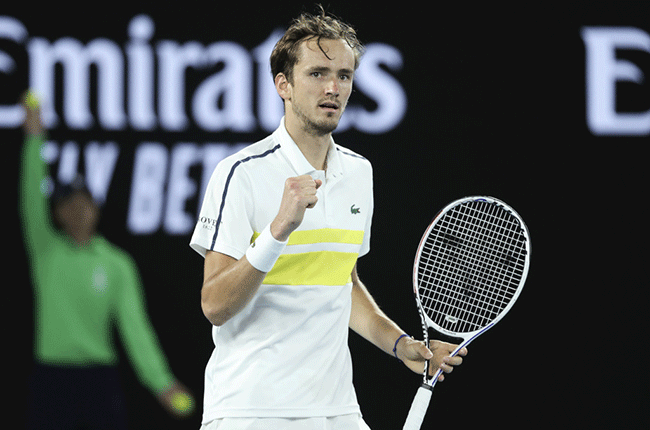 Russia's Daniil Medvedev will take the world number two ranking on March 15, the ATP said Saturday, and become the first man outside the sport's 'Big Four' to occupy the spot in almost 16 years.

The 25-year-old Russian will replace Rafael Nadal as the number two behind Novak Djokovic who on Monday will set a record himself for total weeks in the top spot with 311.

Since July 25, 2005, only Djokovic, Nadal, Roger Federer and Andy Murray have made the top two.

"With the release of next week's @atptour draws, @DaniilMedwed is confirmed to become World No. 2 on 15 March," the ATP tweeted.

"Medvedev will be the 1st player in the Top 2 since 25 July 2005 other than the Big 4 of @DjokerNole, @RafaelNadal, @rogerfederer and @andy_murray."

Medvedev, who was runner-up to Djokovic at the Australian Open final last month, would have taken the number two ranking this week had he made the final in Rotterdam.

However, he lost in straight sets to Dusan Lajovic in the first round.

With the release of next week's @ATPTour draws, @DaniilMedwed is confirmed to become World No. 2 in @FedEx ATP Rankings on 15 March.

Medvedev will be the 1st player in the Top 2 since 25 July 2005 other than the Big 4 of @DjokerNole, @RafaelNadal, @RogerFederer and @Andy_Murray.

We live in a world where facts and fiction get blurred
In times of uncertainty you need journalism you can trust. For 14 free days, you can have access to a world of in-depth analyses, investigative journalism, top opinions and a range of features. Journalism strengthens democracy. Invest in the future today. Thereafter you will be billed R75 per month. You can cancel anytime and if you cancel within 14 days you won't be billed.
Subscribe to News24
Related Links
Tsitsipas, Rublev to clash for Rotterdam final spot
After 'long, hard road', Federer 'pumped up' for return
Roland Garros confident of May-June return, 'maximise number of fans'
Next on Sport24
Djokovic repeats no vaccination stance as US Open slips away