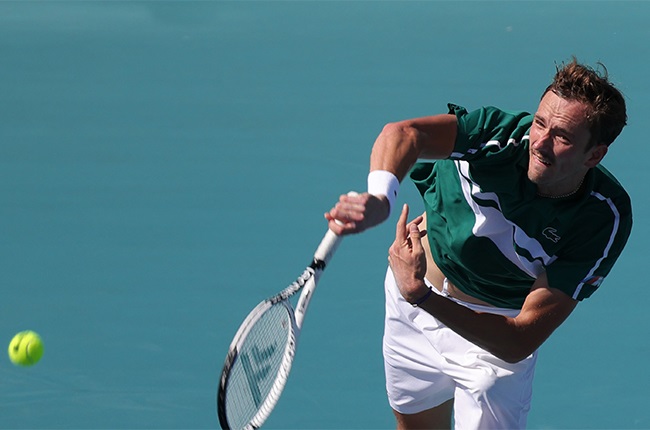 Top seed Daniil Medvedev powered through a rough patch to beat James Duckworth 6-2, 6-4 on Thursday and reach the quarter-finals of the ATP Toronto Masters.

Russia's Medvedev was in cruise control, up a set and 5-1 in the third-round match, when he was broken by his 85th-ranked Australian opponent.

But the 2019 Canada finalist regained his edge to close out the win in 69 minutes on a second match point.

"When your back is against the wall, you play much better," Medvedev said of Duckworth. "He came closer at the end and put pressure on me.

"I handled it. I'm really happy with this win. I had never trained with him or played him, so I didn't exactly know what to expect.

"Sometimes, you need to find out things during the match."

Medvedev finished with 10 aces as he reached his eighth quarter-final at the Masters level - all achieved since 2019.

He produced 20 winners and 15 unforced errors on the way into a quarter-final against Pole Hubert Hurkacz, who scored a 6-7 (7/9), 6-4, 6-4 win over Nikoloz Basilashvili of Georgia.

Each man struck more than 50 unforced errors, but Hurkacz came up with 30 winners and 22 aces in two and three-quarter hours of battle.

The Pole defeated Medvedev at Wimbledon only weeks ago.

Hurkacz was playing his first match of the week after a seed's bye in the first round followed by Kei Nishikori's injury withdrawal before their second-round encounter.

"Playing my first match, I'm really happy with this victory," he said. "I had opportunities in the first set but I couldn't manage.

"I had to stay consistent and keep fighting for every point."

Third-seeded Stefanos Tsitsipas celebrated his 23rd birthday with a solid 6-3, 6-2 victory over Olympic silver medallist Karen Khachanov that put him into his fourth Masters 1000 quarter-final of the season.

The Greek set up a last-eight meeting with in-form Norwegian Casper Ruud, who extended his summer win streak to 13 matches.

Ruud claimed his 37th win of the season against just nine defeats and said that making the transition from clay to hardcourts is all a part of the season.

"It's fun to play on hardcourt, even if I've had my best results on clay," he said. "My best Slam result this season was at the Australian Open (quarter-finals)."

He finished off Khachanov in 80 minutes, with the Russian committing more than 30 unforced errors.

Birthday boy Tsitsipas received a serenade from fans and a cake on court.

"This is one of the best feelings that you can experience on a tennis court, I'm glad they remembered," he said.

American Reilly Opelka, who has eliminated Nick Kyrgios and Grigor Dimitrov this week, added South Africa's Lloyd Harris to his victim's list with a 4-6, 7-6 (8/6), 7-6 (7/4) comeback effort.

Reilly rising ?? @ReillyOpelka slips past Lloyd Harris 4-6 7-6 7-6 to reach his third Masters 1000 quarter-final in less than a year.#NBO21 pic.twitter.com/TcILOPcqby

Elsewhere, a 20-ace performance was more than enough to see John Isner through to the last eight as the Atlanta tournament champion won an eighth consecutive match, defeating fourth seed Andrey Rublev 7-5, 7-6 (7/5).

The American showed his determination to reach an 18th quarter-final at the elite Masters level as he saved three break points in the seventh game of the second set with aces.

The 36-year-old spent an hour and three quarters in advancing with 29 winners and 28 unforced errors.

Isner next faces France's Gael Monfils, who extended his career revival after a fallow pandemic period with a 6-1, 7-6 (7-2) defeat of American Frances Tiafoe.

Monfils reached his first quarter-final since Dubai in February.

Spanish 10th seed Roberto Bautista Agut defeated Argentine eighth seed Diego Schwartzman 6-3, 3-6, 7-5 and next plays Opelka, whom he beat in the first round at Doha this season.

We live in a world where facts and fiction get blurred
In times of uncertainty you need journalism you can trust. For only R75 per month, you have access to a world of in-depth analyses, investigative journalism, top opinions and a range of features. Journalism strengthens democracy. Invest in the future today.
Subscribe to News24
Next on Sport24
Djokovic sends Davis Cup semi-final into doubles decider

Choose your newsletters
Voting Booth
What are your views on the World Rugby men's Player of the Year nominations for 2021 not including any Springboks?
Please select an option Oops! Something went wrong, please try again later.
It's a disgrace! Both Siya Kolisi AND Eben Etzebeth should have been nominated!
39% - 5555 votes
Siya, at the very least, should have been included after a superb season
7% - 937 votes
Etzebeth has been SA's best player this year and should feel hard done by
20% - 2894 votes
Get over it! Moaning about this just sounds like sour grapes!
34% - 4733 votes
Previous Results
Showmax
The story of a legend: Sir Alex Ferguson