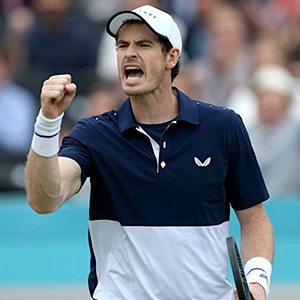 Andy Murray admits he has gone through "emotional ups and downs" during his recovery process but is now feeling optimistic as he closes on a return to full fitness.

Having undergone hip resurfacing surgery in January last year, Murray made a successful return in June and was back to trophy-winning ways by October as he won the European Open in Antwerp.

He suffered a fresh setback during the Davis Cup in November and was forced to pull out of a string of tournaments, including the Australian Open, at the start of the 2020 season.

In February he admitted that his latest injury was "unbelievably complex" and he could require further surgery.

However, after an initially difficult couple of months, he appears to be getting better and is hopeful of making a return soon.

"When you're not getting better after four or five weeks of rest, you're sort of being told 'this could be what happened, we need to investigate this further'. When you are told that, you start thinking the worst and if that's the case it's obviously career-threatening," he told Amazon Prime Video.

"It's been difficult, the emotional ups and downs of just not knowing what's going on and then being given potential worst-case scenarios and thinking this might be it.

"You go into scans thinking if you get the wrong news from this then it's done. So it's hard from that respect, but thankfully that's been really good.

"I've been practicing on these courts the last couple of weeks and been feeling quite well. Practiced two, two-and-a-half hours some days and it's (the injury) has been responding well so fingers crossed it stays that way."

We live in a world where facts and fiction get blurred
In times of uncertainty you need journalism you can trust. For 14 free days, you can have access to a world of in-depth analyses, investigative journalism, top opinions and a range of features. Journalism strengthens democracy. Invest in the future today. Thereafter you will be billed R75 per month. You can cancel anytime and if you cancel within 14 days you won't be billed.
Subscribe to News24
Related Links
Russian young gun backs decision to reschedule French Open
Nadal pays tribute to ‘heroes’ on the frontline of coronavirus fight
SA's Anderson pleased with recovery progress
Next on Sport
Djokovic downs Shapovalov to set up Adelaide semi with Medvedev