Brisbane - Kei Nishikori and Grigor Dimitrov had straight-sets wins on Wednesday to reach the quarter-finals at the Brisbane International, where they'll meet in a rematch of the 2017 final.

Second-seeded Nishikori broke at love in the 11th game to seize momentum in a 7-5, 6-2 win over Denis Kudla in the second round, his season-opening match after earning a first-round bye in Brisbane.

Sixth-seeded Dimitrov, who beat Nishikori in the 2017 final here, had to withstand a late comeback from local favorite John Millman before winning 6-3, 6-4. He had three points for a 5-1 lead in the second set but was broken as Millman went on a roll before fading late.

"I was two breaks up and then all a sudden it was 4-all and he was up 40-15," Dimitrov said, explaining the lapse he had before regaining control at the Pat Rafter Arena. "It was a great match. I feel positive from it. My movement went really well."

Third-seeded Kyle Edmund had an upset 7-6 (6), 6-4 loss to Japanese qualifier Yasutaka Uchiyama in the second round.

Anastasija Sevastova set up a women's quarter-final match against US Open champion Naomi Osaka when she beat Harriet Dart 6-2, 6-0. 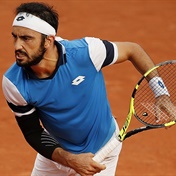