PICTURES | Nadal whips up a storm in the kitchen for wife 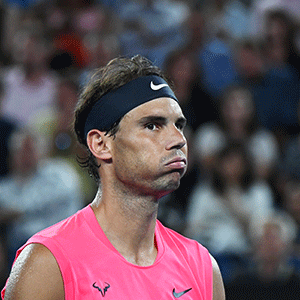 World No 2 Rafael Nadal is making the most of his enforced coronavirus pandemic isolation - by scoring points with his new wife in the kitchen.

READ | Convicted rapist Bob Hewitt to be freed on parole

The 19-time Grand Slam winner - looking somewhat unshaven - took to social media on Tuesday to post pictures of him whipping up a culinary delight on the stove.

Nadal, one Slam title shy of great rival Roger Federer's 20-mark, may have to wait until September to draw level after the French Open, originally scheduled for May, was postponed until later in the year due to the Covid-19 outbreak.

Nadal is a 12-time winner in Paris.

In his post (translated into English from Spanish), Nadal wrote: "Today it's time to cook for my wife and I ... I hope you are all well and taking care of yourselves at home. Strength and lots of encouragement

We live in a world where facts and fiction get blurred
In times of uncertainty you need journalism you can trust. For only R75 per month, you have access to a world of in-depth analyses, investigative journalism, top opinions and a range of features. Journalism strengthens democracy. Invest in the future today.
Subscribe to News24
Related Links
Nadal may skip the US Open
SA's Anderson pleased with recovery progress
Russian young gun backs decision to reschedule French Open
Next on Sport24
Roger Federer drops out of top 10 as Norrie climbs rankings

Choose your newsletters
Voting Booth
After the opening weekend of URC action, what did you make of the South African struggles?
Please select an option Oops! Something went wrong, please try again later.
It exposed the quality of South African rugby...
38% - 2072 votes
There were positives to take
7% - 362 votes
We shouldn't read too much into one weekend
17% - 907 votes
It will take the SA sides time to adjust to the new competition
39% - 2132 votes
Previous Results
Showmax
The story of a legend: Sir Alex Ferguson