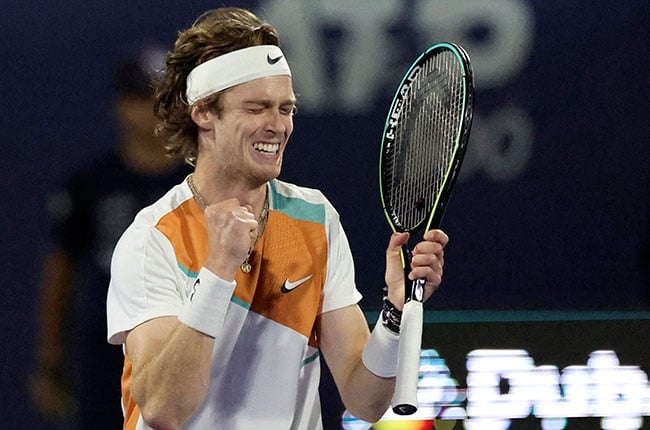 Top seed Andrey Rublev set up a double duty quarter-final matchup at the ATP and WTA Washington Open on Friday by ousting US 13th seed Maxime Cressy in the US Open tuneup.

World number eight Rublev defeated Cressy 6-4, 7-6 (10/8) after one hour and 42 minutes in a match postponed from Thursday due to rain.

Next up for Rublev is 99th-ranked US wildcard J.J. Wolf, who beat Danish ninth seed Holger Rune 7-5, 4-6, 6-3 in two hours and 36 minutes in their rain-delayed encounter.

Rublev broke to 2-1 and held from there to win the first set in 35 minutes without facing a break point.

In the second set, Rublev saved a break point in the second game with a backhand winner and battled into the tie-breaker, where he denied Cressy a set point with his eighth ace and captured the victory on his ninth.

Rublev, who had only nine unforced errors, seeks his fourth title of the season after Marseille, Dubai and Belgrade to match Rafael Nadal and Carlos Alcaraz for the most ATP trophies this year.

World number 28 Rune's back-to-back double faults handed Wolf the first set. The Dane forced a third set only to surrender a break in the penultimate game and fall on a Wolf ace in an eight-minute final game.

Australia's 63rd-ranked Kyrgios broke US fourth seed Reilly Opelka in the first game after their resumption for a 3-1 lead in the second set and went on to complete a 7-6 (7/1), 6-2 victory.

Kyrgios, who won the most recent of his six ATP titles at Washington in 2019, booked a last-eight date with 10th seed Tiafoe, who reached his first hometown quarter-final by eliminating Dutch eighth seed Botic van de Zandschulp 4-6, 6-2, 6-3. Rain had stopped them after two sets.

World number 20 Azarenka, 33, won an 80-minute first set then dominated the second to secure her first WTA quarter-final berth since January in Adelaide.

Azarenka, a two-time Australian Open champion and three-time US Open runner-up, was set for her second match of the day, against Chinese lucky loser Wang Xiyu, for a semi-final spot.

Kanepi, her age and world rank at 37, seeks her fifth career WTA title but first since the 2013 Brussels Open. Her only hardcourt title came at Brisbane in 2012.

Results from Friday's fifth day of the ATP and WTA Washington Open (x denotes seed; players representing Russia and Belarus are banned from competing under the name or flag of their countries):

We live in a world where facts and fiction get blurred
In times of uncertainty you need journalism you can trust. For 14 free days, you can have access to a world of in-depth analyses, investigative journalism, top opinions and a range of features. Journalism strengthens democracy. Invest in the future today. Thereafter you will be billed R75 per month. You can cancel anytime and if you cancel within 14 days you won't be billed.
Subscribe to News24
Next on Sport24
Nadal pulls out of Montreal ahead of US Open