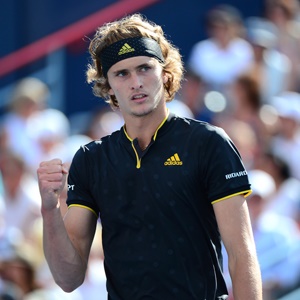 Cincinnati - He's the hottest man in tennis after winning trophies at Montreal and Washington this month, but Alexander Zverev would like to escape his opening round without a scare for once.

The 20-year-old German, a career-best seventh in this week's ATP rankings, could complete a hat trick of titles this week at Cincinnati in the last major tuneup for the US Open, which starts August 28 in New York.

But his first matches have been nail-biters in both championship runs, Australia's Jordan Thompson falling 4-6, 6-3, 7-6 (7/5) at Washington and France's Richard Gasquet squandering three match points in losing 6-3, 4-6 7-6 (7/3) at Montreal.

"I won both first rounds in Montreal and Washington 7-6 in the third and then after that I haven't lost a set in the whole tournament," Zverev said on Tuesday.

"I think winning those kinds of matches helps as well. That gives you a lot of confidence for the next few rounds."

Zverev has captured five titles this year, taking Montpellier and Rome after being pushed to three sets in openers and Munich after dropping the first set but winning two tie-breakers in his second match against countryman Jan-Lennard Struff.

"I feel well on the court," Zverev said. "I feel very confident."

Zverev, who had a first-round bye, opens Wednesday against 19-year-old American Frances Tiafoe, a second-round loser in straight sets to Zverev this year at Wimbledon and the Australian Open in their only career ATP meetings.

Due to injuries and withdrawals, the only player ranked above Zverev in the field is Spain's Rafael Nadal, who takes over the world number one spot next week from Britain's Andy Murray, out with a hip injury.

Coming off his best Grand Slam run into the fourth round at Wimbledon, Zverev looks ready to make a deep run on the US Open hardcourts.

"I don't put pressure on myself, but obviously I want to do well there," he said. "I know I'm in a position to do so. I just won back-to-back weeks with one Masters event in it so I know I can maybe have a good US Open."

Zverev says better conditioning is the secret behind his rise in the past year.

"Physically I improved a lot. My serve improved and my returns improved. But all small things," he said. "In general, my game has become quicker and faster, but that's a lot to do with the physical part."

"He needs someone very high ranked to get in those tournaments. He asked me if I can help him out, I'm like, yeah, sure," Zverev said. "I know him quite well. He's a good guy. Unfortunately we lost, but it was fun."

Zverev said his doubles appearances will be "not very often."

What he will do often is play Brazil's Marcelo Melo in FIFA '17 video games during lulls.

"I think winning in FIFA in the evenings is way important for me, just because mentally that helps me way more than winning Masters. Who cares about that, really?" Zverev said with a smile to a question from Melo.

Zverev claims to overcome huge edges for Melo in team selection, he taking underdogs while the South American grabs the likes of Barcelona, Real Madrid, Bayern Munich or Manchester United.

"We play completely random," Zverev said. "Most of the time he gets something like a five-star team and I get an Arabic team which has one star. And I still beat him."

We live in a world where facts and fiction get blurred
In times of uncertainty you need journalism you can trust. For only R75 per month, you have access to a world of in-depth analyses, investigative journalism, top opinions and a range of features. Journalism strengthens democracy. Invest in the future today.
Subscribe to News24
Related Links
Anderson falls at first hurdle in Cincinnati
Serena aims for 'outrageous' comeback
Raonic withdraws from Cincinnati with sore wrist
Next on Sport24
Roland Garros confident of May-June return, 'maximise number of fans'