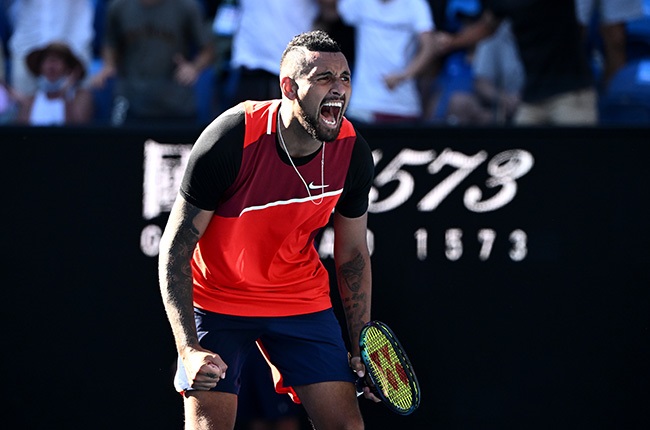 Tennis bad boy Nick Kyrgios has been labelled "an absolute knob" by an Australian Open rival after a heated doubles clash at Melbourne Park.

Kyrgios showboated and revved up the crowd as he and partner Thanasi Kokkinakis downed New Zealand's Michael Venus and Tim Pütz of Germany 7-5, 3-6, 6-3 in the men's doubles quarter-final on Tuesday.

The Aussie mocked Venus' serving style and at one point smashed a ball into the crowd in frustration, hitting a nine-year-old boy.

Doubles specialist Venus was unamused, accusing Kyrgios of egging on spectators to cheer his opponents' mistakes.

"It felt like a circus out there, not really a tennis match... you know if it's on the other foot, old mate (Kyrgios) would have flipped his lid," Venus told TVNZ on Wednesday.

The Kiwi said that after the match he was inundated with messages on social media from people apologising for the way the fiercely pro-Kyrgios crowd behaved.

"They'll always be his supporters and he'll spin it in a way that helps him, but at the end of the day he's an absolute knob," Venus added.

Kyrgios, 26, was once expected to be tennis' next superstar but his sometimes half-hearted approach has seen him slip to 115 in the singles rankings and 259 in doubles.

He remains a major drawcard, particularly in his homeland, but Venus said the Australian's maturity was not much higher than that of the young boy he hit with a ball in the stands.

"You [can] see why he's never fulfilled his potential and probably never will," the New Zealander said.

"His maturity level, it's probably - being generous - about a 10-year-old, it's at about that level."

Kyrgios and Kokkinakis knocked out top seeds Mate Pavic and Nikola Mektic in the second round, with Kyrgios later saying one of the Croatian pair's support staff threatened to fight him in the players' gym.

On Thursday, the Australians booked their spot in the men's doubles final after beating third seeds Marcel Granollers of Spain and Argentina's Horacio Zeballos 7-6 (7/4), 6-4 in the semi-finals.

In the final they will face another Aussie duo, Matthew Ebden and Pax Purcell, who beat second seeds Rajeev Ram from America and Great Britain's Joe Salisbury 6-3, 7-6 (11/9).

Get the newsletter
Voting Booth
Would you be keen to see the Springboks join the Six Nations?
Please select an option Oops! Something went wrong, please try again later.
Yes! The Northern Hemisphere is the future.
52% - 2376 votes
No! The Rugby Championship is still the pinnacle.
48% - 2187 votes
Previous Results
Showmax
The story of a legend: Sir Alex Ferguson